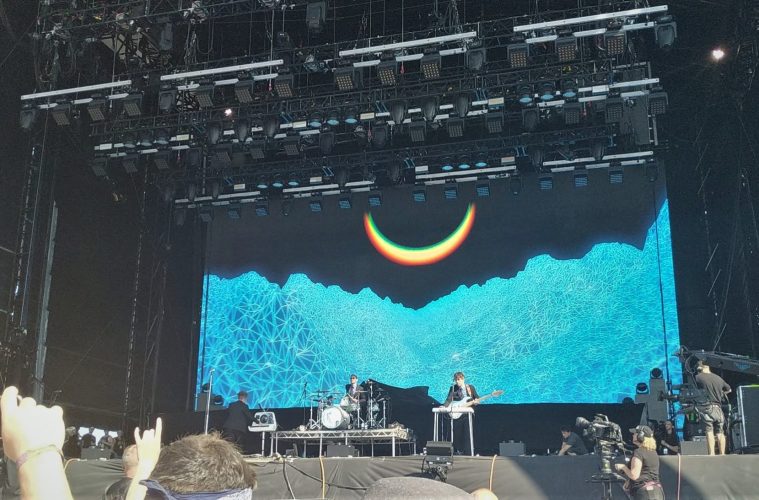 You may have heard the phrase ‘there ain’t no rest for the wicked’ before, but it seems like Enter Shikari have truly made it their mantra this festival season.

It’s been five years since the guys have played Reading and Leeds, and, by god, are they making up for it – fans arrived already astonished over the four sets lined-up, entirely unaware of the secret FIFTH set planned for Saturday at Reading’s BBC Introducing Stage. Announced just an hour before the band took the stage, the massive crowd spoke volumes; hundreds gathered to joyously sing along to Rou Reynolds’ dulcet tones, the love for this band impossible to ignore. The choir of voices singing along to acoustic tracks felt like a true ‘calm before the storm’ – a warm up for the chaos that was to be Shikari Sunday.

And, boy, is Sunday a scorcher. It’s 31 degrees and fans are already packing in close to the Main Stage, the sun beating down on them relentlessly. Despite the near-unbearable heat, however, there is an undeniable thrum of excitement rippling through the crowd. The regular Shikari chant of ‘And still we will be here…’ bounces back and forth, everyone hoping that it may drag the band on stage sooner – and, suddenly, they’re here. Newly recorded single Stop the Clocks opens the set, and it matches the scene perfectly. The track’s bright energy and catchy lyrics have everyone dancing and singing along in the midday sun, regardless of if they’ve heard it before or not.

But, after that, it’s on – Stop the Clocks got the crowd wiggling, but the rest of the set kicks it up a notch. The crowd excitedly sings ‘come and join the party leave anxieties behind…’ as Sssnakepit makes an appearance, everyone giddily excited for the anarchy that is to come. As the song’s message of letting go of your inhibitions wafts it way through the crowd, pits become more pronounced and everyone is letting loose. By the time The Paddington Frisk rears its head, everyone is most definitely ready to ‘punch a gibbon right in the f****** face’, in the oh-so-eloquent words of Mr. Reynolds.

Pits crash on in a raucous blur through Rabble Rouser and Juggernauts, everyone in the crowd screaming along despite the dust in the air coating their lungs. They’re also wildly fun, people doing forward rolls into the centre of them and dancing their hearts out. By the time the Quickfire Round is reached the entire band is covered in sweat, Reynolds taking full advantage of his lack of instrument by removing his blazer and shirt (a moment of silence for drummer Rob Rolfe who is probably melting). Despite the hot conditions, however, everyone is in amazingly high spirits – one person even retrieves a phone dropped in the pit to see it completely smashed, but simply grins wider before throwing themself back into the pit for No Sleep Tonight.

Live Outside is the perfect way to end Shikari’s first set of the day, the glorious sunshine heightening the energy of the song tenfold. By the time everyone is limping away from the Main Stage, covered in sweat, questioning who’s stupid idea it was to have FLAMES on the stage when it’s already THIRTY-ONE DEGREES (but really), it feels like the day is already over – how the hell is anyone going to have energy for the Pit set later? How are we still standing? Jesus, please, how will I ever get back to my tent? Should we just crawl?

But somehow – and we genuinely don’t know how – we make it to the second set of the day. Everyone has downed a few gallons of water (beer) and had a little rest, and now we’re good as new. Fans crowd into the Pit Stage, excitedly chattering about which tracks they want Shikari to knock out, aware of the fact they’ve promised an entirely different set.

By the time Enter Shikari take the stage, the Pit feels like it’s vibrating. The Appeal & the Mindsweep I floods the tent, and by the time everyone is screaming back ‘I AM A MINDSWEEPEEEEEER – FOCUS ON ME!’ the party is in full swing. The crowd is a LOT sweatier than earlier, partly thanks to the smaller tent setting but also due to the delirium felt when rarer tracks are played. Tracks like Quelle Surprise and Return to Energiser feel like whirlpools of grit and screaming, everyone eager to yell the lyrics into one another’s face before being sucked into another pit. The biggest treat is the live debut (well, almost – Leeds got the privilege of hearing it two days earlier) of Tribalism. When we say everyone lost their collective minds, we are not exaggerating. The crowd most definitely did not ‘stay silent’ and ‘made as much noise’ as they could, opening pits wider than any had been prior.

Whilst there had been many moments of comfortable banter throughout the set, including a very well executed and not at all stilted outfit change, perhaps the most poignant was Reynolds’ serious speech about climate change. Despite speaking about Ed Hawkins’ warming stripes on the Main Stage earlier, the group take time to yet again speak up about the ‘Climate Emergency’, Reynolds even putting a banner over one of the screens before Arguing With Thermometers. It’s a sign of just how much these guys care, and the support in the tent is clear, people clapping and yelling in support as Reynolds jokingly says ‘ALRIGHT, THEN DON’T MAKE US HAVE TO TELL YOU GUYS AGAIN!’

It’s nearing the end when Slipshod makes a glorious appearance, guaranteeing that everyone will leave with a croaky voice after screaming ‘GET ME THE MANAGEEEER!’ Slipshod is a perfect festival song, a true scream-along, and it flows perfectly into the second-appearance of the feel good anthem that is Live Outside. By the time The Appeal & the Mindsweep II is closing off the set, people are crowdsurfing in waves, wanting to soak up every last ounce of energy they can before Shikari sign off for the day.

And that’s that. As the St. Albans lads leave the stage, everyone takes a moment to regain their breath. The shirt you’re wearing is wringably soaking and it’s a bit gross, but the afterglow of the show makes it bearable. Enter Shikari are truly something else – imagine putting on a record-breaking five acts over a festival weekend and not faltering in momentum for a second!? We don’t know how they do it, but we’re incredibly bloody thankful. Absolute mad men.