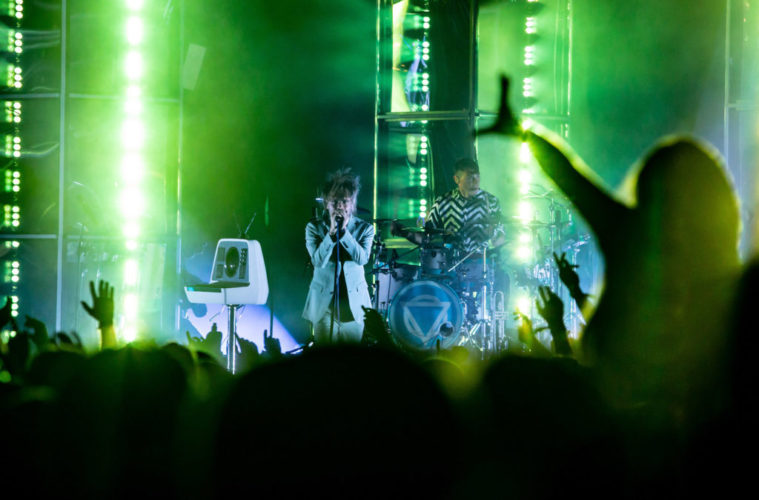 The electricity is undeniable. After a weekend of waiting, the sun is finally setting, casting a golden glow over the crowd. It’s what everyone’s been waiting for: you can see the shirts, spy the tattoos, hear the hums of songs you’re about to hear live. Five inflatable beach balls and a lone lilo are bouncing around overhead, and the addition of each inflatable toy is accompanied by drunken cheers. The giddy audience is using any excuse to release some of its overflowing excitement. Enter Shikari are set to come on in just moments, and everyone around is already coordinating where they will meet up when the crowd inevitably sucks them in and swallows them whole. Everybody knows the chaos that they’re about to experience and they’re absolutely living for it.

The band announce their arrival with the lyrics, ‘Are you staying awake for the lift off, tonight?’, and the grin that tears its way across everyone’s face is immediate. The song eases the audience in gently, being followed by the iconic Juggernauts which only heightens the sense of community within the crowd; everyone knows the words thanks to Rou Reynolds’ clear enunciation, resulting in pairs forming within the pit to yell: ‘now don’t get me wrong, I love what you done with the place…’ at one another. The only way to describe this feeling of connection is kinship, and it results in the crowd’s energy increasing tenfold.

Before the next song starts Reynolds takes a moment to fret over the fact he didn’t notice a member of the crowd attempting to propose, talking about how he was just so ‘in the zone’ that he hadn’t realised. The group pause to get the couple up on stage, hugging and congratulating the newly engaged pair. The charm of Enter Shikari flushes over the audience in waves: it’s a reminder of just how human and humble the members all are, despite how hypnotic and aggressive some of their music can be. The Last Garrison is welcomed with an additional burst of enthusiasm, everyone wanting to celebrate the couple’s unification. Despite the song’s theme of war, the vibe is fittingly light and hopeful, the crowd collectively singing, ‘there’s still air in my lungs, still blood in my veins.’ This is followed by Shinrin-Yoku and Undercover Agents, sticking to the lighter, more playful and bouncy side of Enter Shikari’s music.

Then Destabilise really gets the blood pumping in preparation for Arguing with Thermometers, a song that has people slamming into one another growling, ‘you know there’s oil in the ice!” which is a response it seems Enter Shikari still marvel at, taking a second to grin as they see their crowd singing along to such important and political lyrics. This is followed by Rabble Rouser, one of the most fun songs of the set, everyone thriving in the moments they are allowed to scream, ‘I’m on stage with a face like a sack of screwdrivers!’ Rabble Rouser feels very much like a buffer between deep messages, however, as Anaesthetist begins and the crowd once again knows it’s ON – ‘you ******g spanner’ is screamed with such vigour it leaves many throats in the crowd raw.

Enter Shikari are a very socially aware band, yes, but they’re also incredibly aware of what their crowds want; with this in mind, it is no surprise that they have started doing their Quick Fire at shows. Starting with Sorry, You’re Not a Winner, morphing into Sssnakepit, then …Meltdown and finally finishing with The Jester, the group have meshed together all the fastest moments of their songs into just three minutes – and who says they can’t get a crowd moving? The beat increases with each song, the energy only sky rocketing higher and higher. The pit pulls back, back, back, before crashing into itself. Bodies are thrumming, running, jumping. It’s chaotic, it’s brilliant. A chunk of people fall down at one point, but immediately bob back into view to continue on their hurricane around the pit. Everyone is offering to fling you up to crowdsurf, everyone has sweat out any walls they had up at the start of the show. It’s just screams and smiles and incoherent babbling about how content you feel.

Live Outside is a perfect closer, a joyous singalong that Reynolds notes is very apt considering the festival setting. Reynolds has tossed aside his shirt by now, showing just how much he has been jumping around onstage along with the audience. He truly gives it all he has in the closing song, passion evident in his delivery to the final note – and the crowd’s appreciation is clear. The group go off to deafening cheers.

Tonight, then, Enter Shikari have proved yet again that they are masters at commanding a festival stage. A true sign of just how enamoured the crowd were: The Sights plays after the band are long gone and the crowd still attempt to open a pit before the song is eventually cut off. The group burrow into your veins and inject you with a fire that stays lingering for days after seeing them, and that’s what makes them so special. Four humble lads from Hertfordshire can go onstage and entirely capture anyone and everyone watching. They’re more than a spark – they’re a supernova of pure talent.