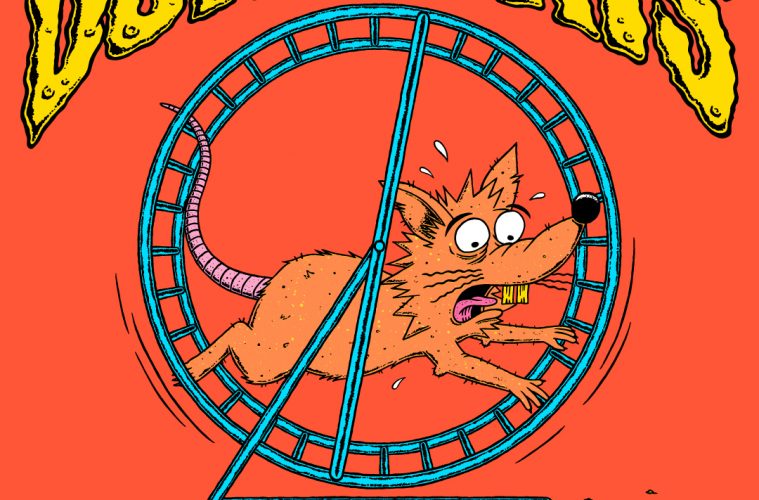 Dune Rats – Hurry Up And Wait

“It was always just gonna be Dunies.” says Dune Rats frontman Danny Beus – and one glance at the artwork, one quick read over the tracklist, ten seconds into the first track confirms as much (the latter comprising of a voicemail about brotherhood and ‘snorting bags’ you can’t help but giggle at because it’s so unapologetic and heartfelt). There’s not a second on the Aussie trio’s third record, Hurry Up And Wait, that feels inauthentic – it’s not an artfully crafted 12-track journey, it’s a take-it-or-leave-it 12 track ultimatum: this is what we’re doing, this is what Dune Rats are, come and have a good time with us or don’t.

As you’d expect, the album is a moshpit fantasy – gang vocals aplenty litter the tracks from the anthemic chorus of RUBBER ARM to the victory cry of album closer MOUNTAINS COME AND GO BUT AUSSIE PUNK LIVES ON FOREVER, and scores of call-and-response moments, riffs that hurl you left right and centre, and drums perfectly paced for jumping, make this album seem like it was written to be played live. It almost has the energy of a live album: it’s unfailingly fun, even at its heavier, angrier moments, the biggest of which we get in November’s single CRAZY, a riotous anti-anthem laden with impassioned scream vocals and an opening bassline that practically grabs you and throws you into a moshpit.

Dune Rats don’t abandon making an album that’s musically sick in favour of making one that’s fun though! They expertly combine technical (well, as technical as punk gets) moments with simple riffs to ensure every track packs the biggest punch possible. RUBBER ARM features a groovy, bluesy chromatic guitar line, NO PLANS sounds almost 2000s pop-punk in its oldschool riff and tongue-in-cheek lyrics about band life, ROCK BOTTOM’s cheery, twangy acoustic guitar creates a beachy, chill vibe underpinning the nihilistic banger, THE SKIDS twinkly, stripped-back-ness lets us take a break and just soak up the tunes (though knowing a Dunies crowd, mosh pits will still be had!)… We could keep going for ages if we just listed every cool moment on the album!

In making an album that’s so truly just what they’re up to, what they’re feeling, just throwing out tunes they think are cool, Dune Rats have given us an amazing combination of irreverent jams (IF MY BONG COULD TALK, BOBBY D), pure bangers (STUPID IS AS STUPID DOES featuring the fantastic K. Flay’s vocals under yet more pacey punchy riffs, NO PLANS, basically every track on the album) – but what remains constant is that Hurry Up And Wait is wholesome, honest, unapologetic, and is going to be absolutely unmissable live.

Hurry Up And Wait is out Friday 31st via Ratbag/BMG.