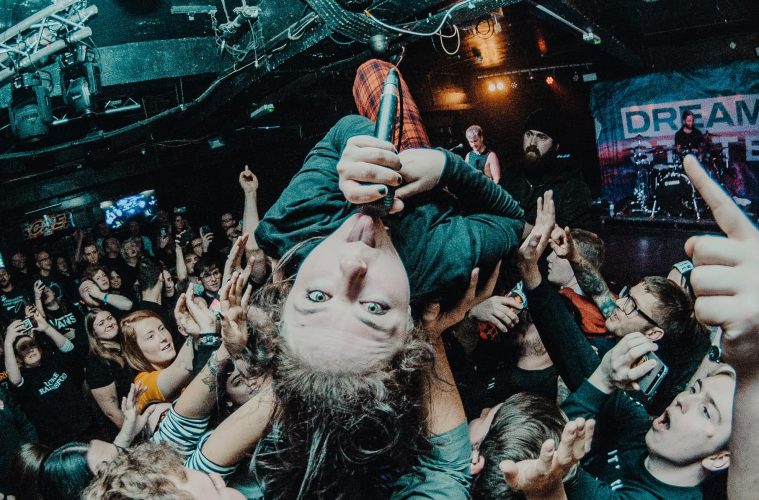 It’s Dream State’s first show following the release of their debut album Primrose Path and you can sense the buzz of excitement, people gradually funnelling into the small venue that is Cathouse. Anticipation is high in the air: The tapping of feet, hushed whispers to friends, moving closer to the front as the seconds tick by.

Opening act Normandie put on a phenomenal show, paving the way with a high energy set. With songs like Dead, White Flag and Collide, even if you don’t know the words you’re sure to be singing along by the end. Singer Philip Strand throws himself into the music headfirst, giving the performance absolutely everything. New song Jericho was also played for the very first time (make sure to look out for it on their upcoming third album!)

And then came the moment everyone had been waiting for. The number of people in the venue hasn’t changed but it somehow feels busier. The crowd collectively holds its breath as the intro builds, an exhale in the form of applause as Made Up Smile played out. The energy is insane, atmosphere mad as CJ Gilpin’s light-yet-haunting vocals fill the room. Hand In Hand follows, and it seems like every single person knows the words, volume intensifying tenfold. It’s as if with every note played, every word sung, the audience become more and more enamoured with a sense of belonging. The band has previously made music focussing on darker themes, and it is clear that everyone in the room can at least somewhat relate to the lyrics of struggling, being knocked down and continuing. Giplin’s performance is moving, her voice almost harrowing – you can sense the struggle and pain that had gone into recording Primrose Path.

One of the most notable things about the performance is the engagement with the audience. Giplin constantly approaches the barrier, interacting with the fans, to the point where she is nearly in the audience. Not to forget a moment where a guitarist DOES enter the crowd, centre moshpit at that. Are You Ready To Live, Twenty Letters, Open Windows, and Primrose all have the crowd feeding off the energy, response particularly large as White Lies is played. As the crowd demands an encore, echoes of ‘HERE WE, HERE WE, HERE WE FUCKING GO’ grow louder and louder, begging for another song. (Spoiler: We get two.) The show concludes with New Waves and In This Hell, the audience going insane, caught in the emotion of collectively coming together to be a part of something bigger.

The underlying truth of the matter is that Dream State have given everything they’ve got. Tackling topics often so difficult to speak about, they put on an overwhelmingly baring and brilliant show, starting the tour off on a very promising note with hopefully many more excellent shows to follow.