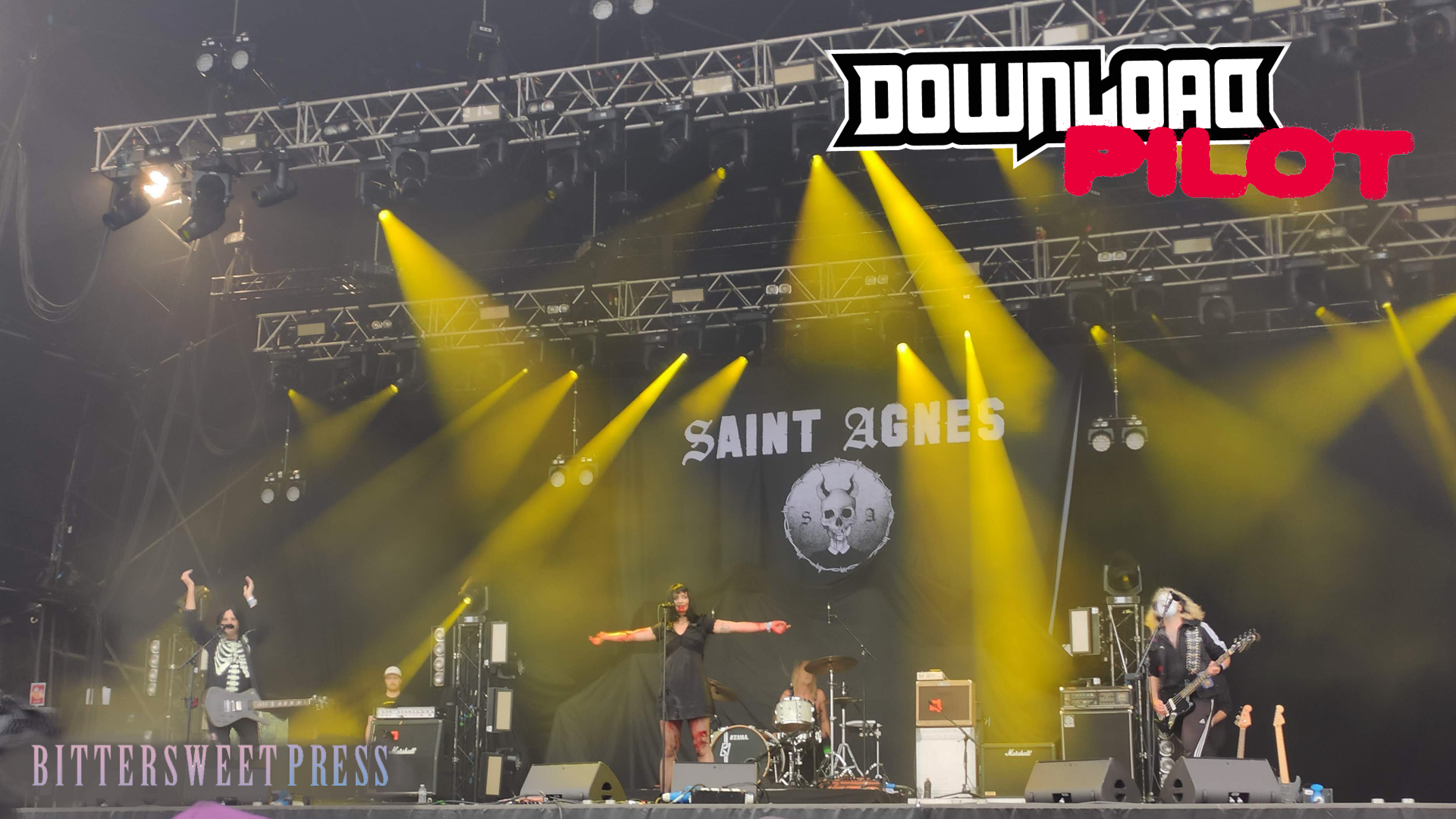 Sunday morning hangovers are nursed away today by Leeds’s Static Dress – glitchy post-hardcore with massive hooks is more than enough to wake up a sleepy Download, and the tent is as packed as it’s been every other day. Setlist highlight: clean.

“We are Saint Agnes… Welcome to your Sunday service.” This is how Kitty Arabella Austen introduces her band to the morning Download crowd, and the atmosphere is set from there on. Between their undead, unreal stage presence and the gritty intensity of their music, they deliver a hypnotic half hour to the crowd, which thickens throughout until not a soul is immune to the raw power Saint Agnes wield. Turning around halfway through the set, Kitty returns drenched in blood for an immense end to the set, and hordes of new fans. Setlist highlight: Repent

From the moment she struts onto the stage, it is clear that Cassyette is, to put it simply, a fucking star. With her bouncy pigtails and ferocious attitude, the lyrics of Prison Purse ring through the tent: “don’t call me cute, I’m volatile!” She is hypnoticly unique, and everyone is absolutely loving it. Though many of her tracks are unreleased, the crowd doesn’t falter for a second — even if you don’t know the words, there’s no denying that these tracks are absolute fire. Definitely one to keep an eye on. Setlist highlight: Dear Goth

Loathe are a perfect balance between gritty riffs and heavenly soundscapes. Their Deftones-esque charm feels like it may be better suited to the intimacy of the tent, but there’s something captivating about Kadeem France’s mystifying vocals floating out over the open air. The crowd soak up the brutal breakdowns eagerly, as well as floating away in the softer, melodic moments. There’s no denying these guys know how to structure a song, and it’s wild seeing the tracks translated into a live setting. Overall, it’s pretty quality stuff. Setlist highlight: Screaming

Higher Power’s meaty riffs and relentless hardcore energy yields one of the most macho crowds of the weekend, packed with lads who just want a big old mosh and some hench tunes to do it to. Each tune blends into the next like a tidal wave of pure power, and the shoving definitely never lets up. Setlist highlight: World Gone Mad

It’s an intense one for Lonely the Brave. It’s not just their first in a long time, but it’s their first after the release of The Hope List, which was their first record with new singer Jack Bennett – that’s a lot of firsts, so it’s no surprise that Jack seems a bit nervous. And the band handle it with absolute grace, and give a show that’s packed with authentic charm. When a guitar string breaks, Jack stalls the crowd with a irresistible cheek, before transforming back into a rock star to belt out an effortless high note or an impossibly emotional chorus. Setlist highlight: Backroads

Jamie Lenman is the epitome of charm. As he banters with the crowd, there’s no denying that everyone is transfixed — and it definitely helps that his punk bangers also go unbelievably hard. Pits crash around joyously, while the beer-sippers show their enthusiasm with vigorous cheering and rhythmic nodding. Lenman is a one-man juggernaut — he could probably be stood onstage with just a cowbell and still find a way to knock out an absolute banger. Cracking. Setlist highlight: I Don’t Wanna Be Your Friend

What do Nirvana and Elvis Presley have in common? Well, we wouldn’t blame you for saying “absolutely nothing you maniac”… but you would be mistaken. The crown for the most hilarious set of the weekend goes to Elvana. Yes. Elvana. The Nirvana cover band fronted by Elvis Presley… and, yes, it is JUST as amazing as it sounds. The opportunity to throw yourself into a pit for Smells Like Teen Spirit is magical — as is seeing Elvis serenade the Download Dog with a rendition of Hound Dog. This is a set so entirely bizarre and unconventional you just can’t help but love every single second. Setlist highlight: Smells Like Teen Spirit 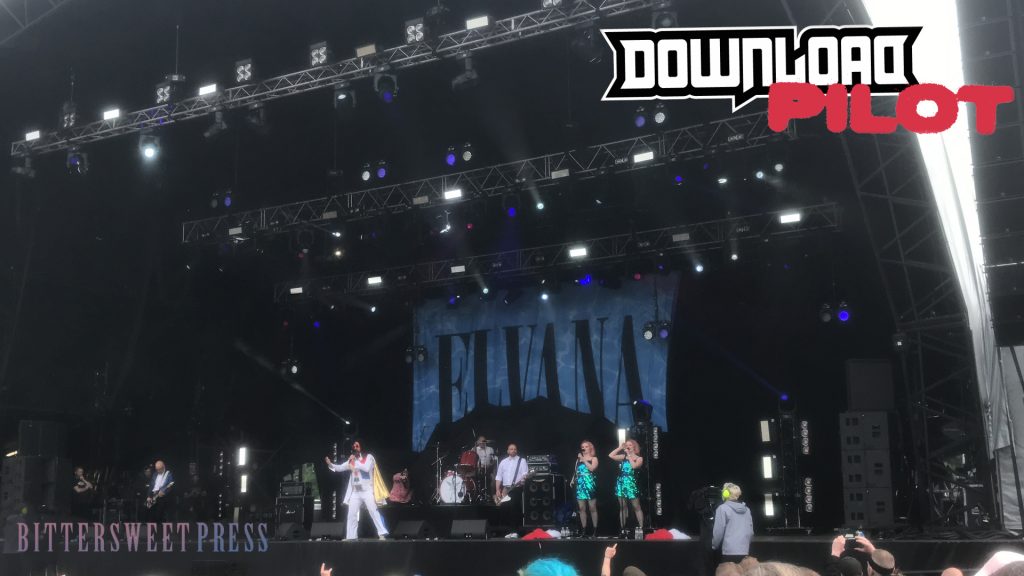 The casual Trash Boat fan ready for a bounce around to the kind of pop-punk excellence the band released on Crown Shyness and Nothing I Write You… will definitely get what they want. But they won’t be prepared for the era-defining surge of new music Trash Boat play from their upcoming Don’t You Feel Amazing? – just as emotive, but even more urgent just on record, the likes of Silence is Golden and utter highlight He’s So Good unveil a reinvented, unboundaried Trash Boat ready to shatter expectations. The booming alt-rock sounds that creep in are even more intense live, and signal the beginning of Trash Boat’s best era yet. Setlist highlight: He’s So Good

What about another combination… Fancy a little bit of heavy metal meets reggae-rock? Of course! Skindred are the kings of crowd-involvement, Benji Webbe’s charisma on another level entirely. From engaging call-and-response to the legendary Newport Helicopter, Webbe has the crowd eating out of his hand… and every little anecdote he recounts to the crowd is met with a howl of laughter. Skindred are just a guaranteed good time, simple as. Setlist highlight: That’s My Jam

We’ve not seen much of the classics at this Download; where the headline slots would usually be ram-packed with ageing icons, there’s been a focus on fresh blood at the Pilot, the chance for the small fry to test out their wings in the big leagues. But that doesn’t mean those gagging for the classics are left unsatisfied — enter Bullet For My Valentine. The heavy metal icons put on a mighty performance, thunderously churning out hit after hit… yet there seems to be no effort to win over any possible new listeners. Where previous headliners have commanded their audiences, encouraging movement and a sense of community, Bullet simply allow the music to do the talking. Diehards are left spellbound, yet some members of the crowd are left waiting for a little extra spark that never quite comes. Setlist highlight: Knives

Download gave us exactly what we needed and more – definitely the best weekend of the last two years, if not of most of our lives, and with festivals being cancelled left right and centre now, this weekend feels even more precious than it already did. As well as being a testament to the fierce love that fuels the rock community, it’s a testament to how relentlessly impressive our scene is – it feels like every band we see is on the brink of something fantastic. Every set is historic not just because of the fact that it’s at Download Pilot but because when are we gonna see so much fresh talent killing it in one place ever again, let alone in the near future? Download Pilot laid out the next five years of rock excellence in just three days, and we’ll never forget it.

Check our reviews of Friday & Saturday, as well as our Download Festival Podcast!