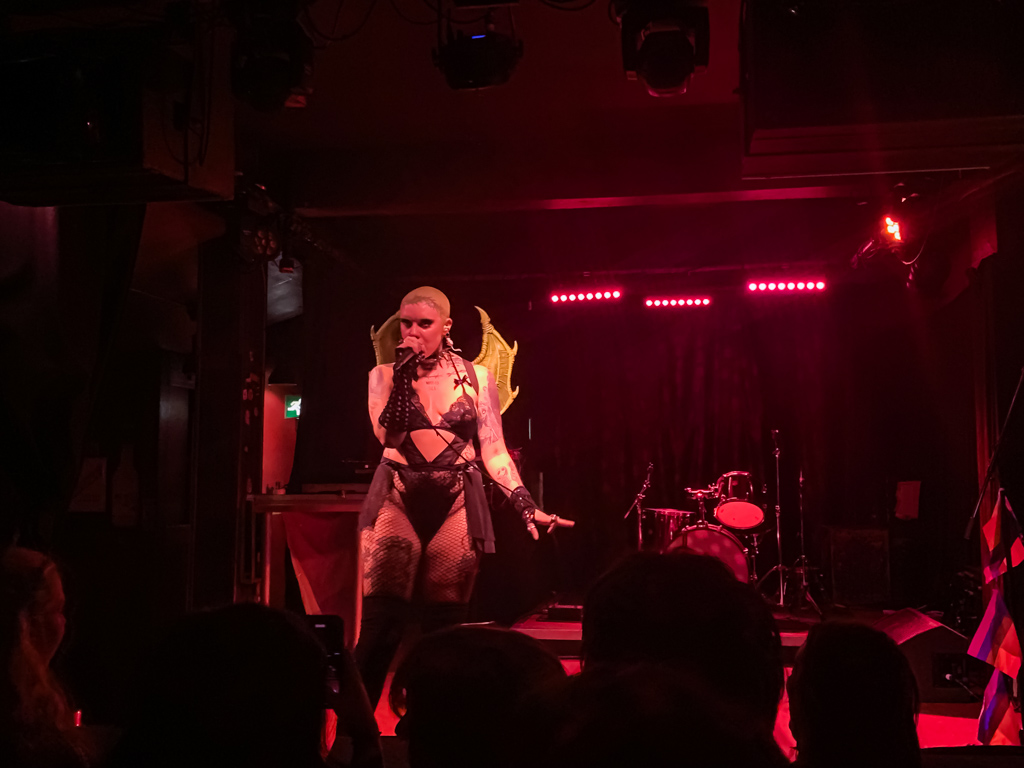 Manchester’s Night and Day Cafe has been sitting at the heart of the city’s DIY and upcoming music scene for as long as it’s been there. Nestled in the core of the thriving Northern Quarter, it’s a hub for many communities, and tonight it’s home to Double Dare Ya’s Manchester launch.

DDY describes itself as a queer collective creating safer, creative spaces for LGBTQ+ community and people of marginalised genders. Having hosted numerous events in their hometown of Sheffield (including a Queer Prom ft BSP fave Delilah Bon!!), we couldn’t be more excited that they’ve hopped over the peaks to Manc to bring the party, and they’ve packed their launch with a real treat of a lineup.

It’s not just a party, it’s not just a gig, it’s a gathering we’re guided through by the deft hosting of Ramona Love, who opened the event by welcoming the crowd into the freshly-decked-out Night and Day. The already-eclectic decor is joined by pride flags to set the scene for tonight, but the audience is really the core of setting the vibe. The room isn’t packed to begin with, but the buzz is real, and the sense of togetherness and hype fills the room more than a crowd really could – this feels like a mates party.

The first artist on tonight is the formidable Storm St Claire, who stomps on to the stage with precisely the energy you’d expect from her name. Oscillating between sunny hooks to thunderous riffs, her blend of pop and darkness is mesmerising.

Up next is Cody Frost – Storm St Claire set a formidable bar, but Double Dare Ya know how to put on a show, and Cody brings a new dimension to the night. Somehow both a fierce performer and totally chill about it, their vocal versatility shines as they drag us through a set of punky bite with pop sensibility. Completely at home on this stage in her hometown, where she started her career busking, every song Cody plays is saturated with confidence and distinctive character honed over the beginning of her career – and tonight, she seems ready for all to come.

Finally up is ZAND – fresh off their electric 2000Trees set, which took place in the best-kept-secret intimacy of the Forest stage, to bring a whole new sort of intimacy to Night and Day tonight. Where Trees feels like a surreal other world where nothing exists but music, Night and Day feels ultra-connected to the network of other venues and artists and bars in Manchester, and ZAND’s set feels like an essential moment amongst all of this evening’s activity.

We’ve had something of a masterclass in dark pop and how to blend it with all sorts of alternative influences tonight, and ZAND is here to deliver the pop quiz. Despite their penchant for a buzzy hook toned down in captivating synth sounds, just this week they’ve also released perhaps their gentlest track to date, Battery Acid, which is a ZAND take on a ballad on a tough subject. And tonight they showcase the full range of their talents, giving a striking performance laden with moments to dance, moments to sink into the beat, moments to feel a bit of everything. In their trademark wings, they’re as otherworldly as ever, and the room is transported with them.