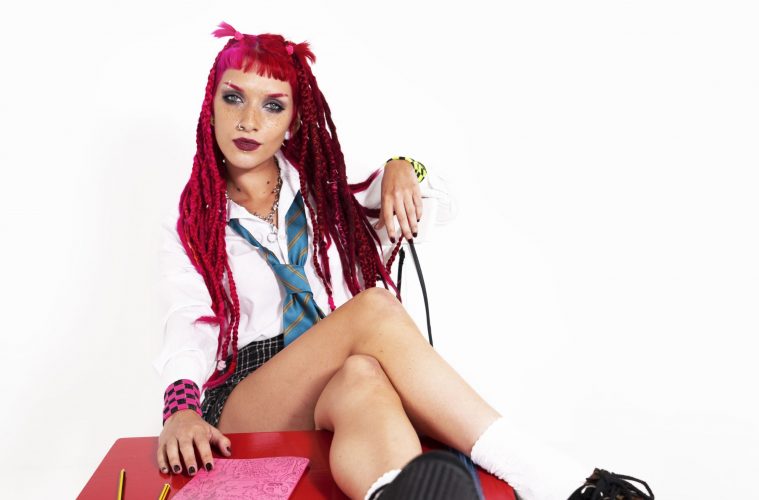 Delilah Bon, the alias of Hands Off Gretel’s whirlwind of a frontwoman, is just as much of a force of nature when it’s just her – if not more so. Describing herself as “Cardi B fronting Slipknot” amongst other things, Delilah Bon’s music is deliciously, ridiculously beyond definition, and latest cut School is an exemplary explosion of her captivating sound.

Delilah’s put a pretty universal mood through her brat-punk hip-hop blender for School. It’s an anthem of empowerment to those who didn’t have a good time in education; those all-too-familiar tales of bullies, less-than-kind teachers, the piercing loneliness. But School is definitely not a negative track – in fact, it’s pretty much the opposite. Delilah spits out her vocals with a fire beneath her; School is her anthem of vindication. Everyone who brought her down, discouraged her, treated her badly, all failed because here she is, turning out electrifying tunes on top of the world, the baddest she’s ever been.

There couldn’t be a more fitting sound for the message of power Delilah’s putting out. Reminiscent of edge-pop-hop icons like Ashnikko in the hauntingly jaunty piano line that underpins the track’s rage, Delilah’s saturated School with swagger and confidence, laughing in the face of the people she’s singing about. Swooping electro lines, awesome vocal screeches in the background, addictive bass, and the perfect injection of attitude – it’s a gorgeous cocktail.

School is out now, stay tuned for news of a debut album.