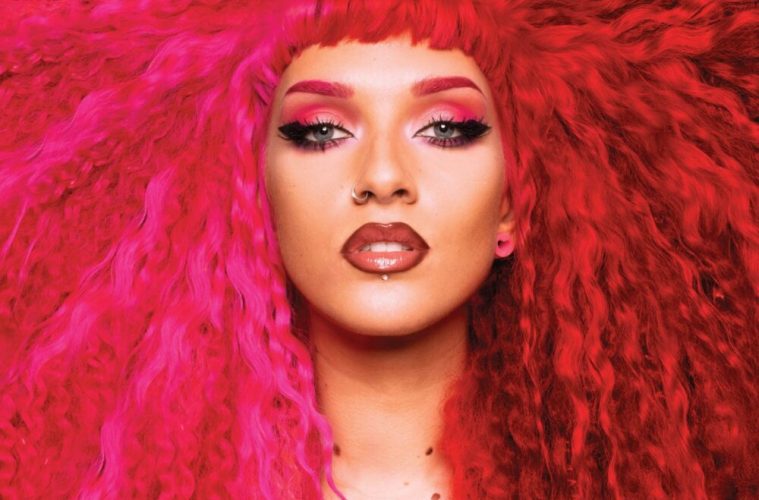 All rise – Delilah Bon has arrived. Her debut record as Delilah, her first foray into rap and hip-hop, her loudest, proudest music yet, and it’s a total riot. It’s a firework display in hot pink, saturated with power found through femininity and sisterhood. Lauren Tate, the woman behind Delilah Bon, is no stranger to making a lot of noise – her day band is none other than Hands Off Gretel, enough said. But on Delilah Bon, her mission is singular – it’s an all girls party, dancing shoes NOT optional.

The first mistake it would be easy to make is that Delilah Bon is a project driven by rage. Her gritty, ferocious flow, song titles like Chop Dicks, and her unforgiving energy definitely feel dark, but stop. No. That’s not Delilah – yes, this is a record about crushing the patriarchy underneath a gigantic stompy boot, but it’s not about men, it’s not for men, it’s not about shouting down the oppressors, it’s about lifting up the women, a battle-cry and a party at the same time. Red Dress sounds vicious, but it’s about the relentless power of Lauren’s relationship with her mum; Chiquitita is laden with screams and fuzzy bass but it’s an ode to intergenerational love; there’s not a moment of rage on the record that isn’t rechannelled into an addictive, inspiring affirmation of strength.

Delilah has range – though she seamlessly slips between the bars of genre boundaries, she’s landed on something unrecognisable, for now. Bad Attitude is packed with the riffs that define the magnitude of her punk days, but the swaggering beginning of Chop Dicks and the groovy vibe of opener and mega highlight Freak of the Week are something entirely different and dizzyingly great. It’s quite literally impossible to stay still listening to this record (so excuse any typos!) but Delilah keeps us on our toes – do I wanna mosh? Do I wanna jump around? Do I wanna shake it? Do I wanna break into some kind of impressive pole/gymnastics routine a la the I Don’t Listen To You music video? All at once? Yeah, that’ll do.

Where My Girlz At? This album is written for people who don’t have a girl gang yet; to make lonely girls feel like part of something, to make insecure girls feel like they’re the baddest bitch on the planet, to make girls who’ve been done wrong feel like they’re ready to crush it. Delilah’s said she wrote the album to make girls alone in their rooms feel better, but she’s done something even more incredible that we’ll see once we get back to live shows. In starting Delilah Bon, there’s now a ready-made girl gang for anyone who’s part of this Delilah Bon Army, just waiting to get together and celebrate one another – Soul Sisters, quite literally.

We could have dedicated part of this review to all the topics and facets of feminism Delilah tackles on her record, but honestly, what’s the point? We’ll never do it as powerfully as she does so instead, here’s an instruction: PUT THE ALBUM ON! Know it was made by a boss babe who literally made every single thing you can see and hear, and know that you’re just as much of a boss babe as she is too.

Delilah Bon is out this Friday.