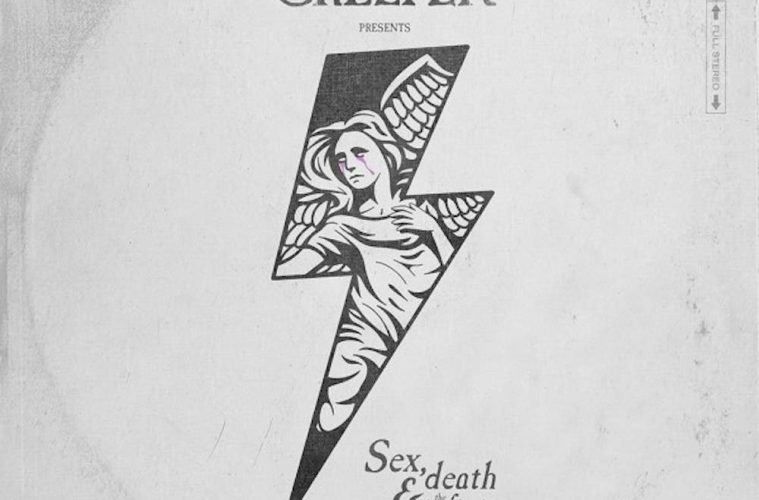 It’s been a hell of a road to get to this release. After their astronomical rise, Creeper just… ended it all. Their infamous Koko show supposedly marked the end of the cult dream, leaving Callous Hearts the world over broken. Skip forward precisely one year, and London’s 229 is packed with a rejoicing crowd – Creeper are back. Now nine months on, one of the most anticipated sophomore records of all time is finally with us, and it confirms what we’ve been expecting – Creeper may be back, but not as we know them. SD&TIV is Creeper mutated, magnified, and making a masterpiece.

Is Sex, Death & The Infinite Void a rock opera? It seems somehow bigger than that – it’s a theatrical apocalypse, a rewriting of an underworld in which hell becomes a seductive nightclub in which you can sing along to anthems of the end at the top of your lungs. Early single Annabelle set the tone for the stomping, suave, self-assured side of the album, and Be My End, Poisoned Heart and the explosive Napalm Girls come together to ensure that Creeper’s unbeatable anthem credentials stay intact. Creeper have always excelled at packing impossible amounts of energy into gorgeous, concept-rich packaging, and they’re more polished than ever on SD&TIV. They worked their way up through the punk scene, and the vitality of their heavier sensibilities is even more present in this record’s more intricate sound.

Will Gould’s inimitable delivery is Sex, Death, & The Infinite Void’s peak – Creeper have built a musical mountain of mammoth proportions; every guitar line, drum beat and current of bass is essential to the landscape and seamlessly executed, and Gould has taken to the stage set up in the music and commanded it with more magnetism than ever before. His charisma and live performance has seen Creeper revered as one of the most exciting bands on the scene since their conception and SD&TIV is the culmination of it all. From Be My End’s intensity to the glorious operatic delivery of Black Moon and the heart-rendingly raw All My Friends, Gould’s performance has infinite dimension and infinite passion.

The record is striking start to finish, in every moment of every track. Perhaps the most remarkable aspect of it is the seamless transition Creeper have made from hardcore cult band to opulent, gothic extravaganza, exhibited best in their gleamingly executed digressions from any semblance of punk. Cyanide is a grooving, Western gin-and-tonic trance, Paradise is a haunted palace of descending guitar lines and eerie pace, Thorns of Love is a black-clad doo-wop before descending into terrifying spoken word and erupting into 80s classic rock.

Any Creeper fan has felt the pangs of one of the band’s recurring themes – the fear and pain of aging. Four Years Ago is Sex, Death & The Infinite Void’s most stinging contribution to Creeper’s tracing of this mortal coil, in the form of a duet between Gould and pianist Hannah Greenwood. Possibly the biggest sonic digression from the album, Four Years Ago is almost dark-pop, a windy whine of strings and nostalgia seamlessly nestling into SD&TIV’s narrative. Narrative-wise, there’s a definite arc to the album that’s expertly navigated by the scattering of interludes. They’re a tricky one to get right, but Sex, Death & The Infinite Void wouldn’t feel right without Roe’s poetic punctuations – they don’t break the flow of the album, rather sucking you in even more. More Careful With Your Heart is a tone-perfect ending to the record, a flawless continuation of All My Friends and a flawless transition to whatever Creeper follow up Sex, Death & The Infinite Void with.

Sex, Death, & The Infinite Void feels so distinctly complete. As an art piece, it stands alone and wows alone. But injected with the life of Creeper as a band, it takes on something even more powerful: the community, fierce emotion, love, pain, and reality that Creeper represent. It might be a fictional narrative of heaven and hell, but it’s made to be listened to on earth. It transports you into its universe, but it’s also grounded firmly in the knowledge that all of its magic can be happening around you in the more mundane world we currently occupy. And with Creeper in it, what a world that is.

Sex, Death and the Infinite Void is out now.