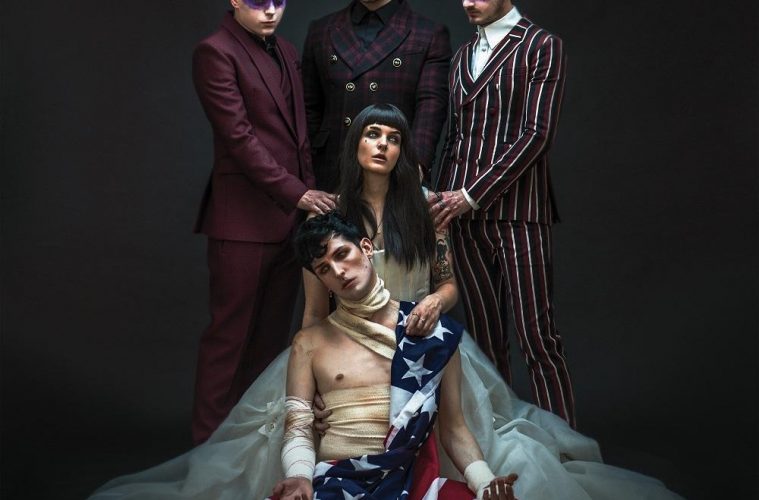 Creeper are masters of metamorphosis, and their latest guise is perhaps their fiercest surge forwards yet. From the humble, horror-punk beginnings that soundtracked their rise to fame, to the cabaret goth-rock of Sex, Death and the Infinite Void, American Noir feels like a climax Creeper have been building to since their beginnings. They’ve become bona-fide classic rock behemoths, with a motorcycle helmet in one hand and a volume of poetry in the other. The dichotomy of triumphant lead single Midnight and haunting follow-up America At Night set the pace for the EP to be some of Creeper’s most cinematic cuts yet, and American Noir certainly meets expectations, and lives up to its name.

Midnight Militia introduces the story of American Noir in a haze of spoken verse, sound effects and eerie dramatics that really feel like we’re hearing a story from the other side. Then no sooner has Will Gould purred out the EP’s title and we launch into Midnight’s soaring duet. Hannah Greenwood and Gould are really in dialogue on American Noir, more stunningly executed than ever – the narrative is seamless, and the delicious grate of their voices weave a world just as vivid as any conjured by the instruments. The same goes for America At Night, though it’s very much the other side of the coin – a sprawling slow-burner of darkness, howling out the lines of the shadowy ballad, Gould and Greenwood combine like silk and leather.

Yes, we’ve heard Hannah do ballads – Crickets has long been a fan-favourite, and she’s stunned on every track she’s contributed vocals to. But American Noir highlight Ghosts Over Calvary is something altogether new. It’s the meatiest rock tune on the EP, replete with a keening guitar solo of mega proportions, hench riffs, and a rasping, resplendent vocal performance from Greenwood. Her command is formidable, and above the rollicking instrumentals, will be an otherworldly sight to see live. Greenwood’s range is still intact, too, as she later delivers the EP’s most tender moment in Damned and Doomed. Touted by Creeper prior to release as one of their favourite songs they’ve ever written, it certainly encapsulates so much of what Creeper have always been about in a beautiful, heart-breaking way. The feverish, intense kind of love we heard of on Eternity, In Your Arms meets the sultry sensuality of SD&TIV meets something painfully pure, as Greenwood murmurs “I was born to die with you” over delicate, gentle instrumentals.

Closer Frozen Night circles back to the EP’s opener, with a distorted, unsettling synth melody atop an acoustic guitar in the same vein as My Chemical Romance’s Romance – but playing in Demolition Lovers’s anti-pole-position. American Noir is almost the antithesis to SD&TIV – where last year’s album stretched luxuriously over sixteen tracks, American Noir packs the same conceptual punch in just eight, three of which are spoken or instrumental tracks. Creeper are magnificent, not merely in quality but in magnitude – from Southampton to the west coast, their stories are as expansive as the Americana they’re channeling, making for a rapturous conclusion to the tales of this era.

American Noir is out now.