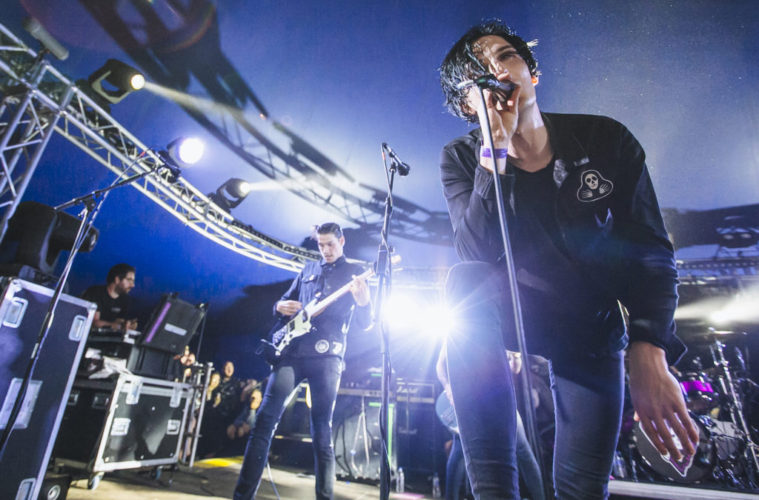 As day two of 2000trees progresses, there’s a bit of a change in the energy of people you see walking around. Given the relaxed nature of the festival, audiences have tended so far to just rock up when the acts they want to see are due to start in order to make the most of the other bands playing, which is why it’s unusual to see the Cave tent filling up steadily with half an hour to go till the next band, especially when there are acts like Mallory Knox and We Were Promised Jetpacks playing elsewhere. However, taking a closer look at the people around you and realising that Creeper are up next, it’s absolutely no surprise that 2000trees’ biggest tent looks set to pull one of the biggest audiences of the weekend. Creeper’s army of dedicated fans make up a huge proportion of Friday’s festival attendees, and it’s finally the set we’ve all been waiting for.

Despite their usual penchant for theatrics and intricate concepts – not to mention vocalist Will Gould’s powerful, almost operatic voice – it’s actually at festivals, when some of the frills have to be left at home, that Creeper are often at their most memorable. Their iconic Reading show marked the beginning of their exponential rise as a band, and indeed every appearance before or since has blown away audiences. Today is no exception.

Right from opener Suzanne, the passion in the tent is absolutely tangible – even casual listeners sing along, only realising now that they know every word. The setlist progresses from drawing people in with newer songs to smashing through older tracks that have surpassed even being simply fan favourites – Black Mass, Gloom and VCR are on classic level. Having said last year that they were leaving behind their first EP for good, Creeper’s immense fanbase refuse to allow the older songs to go into retirement, moshing and crowdsurfing with renewed enthusiasm along to every note.

It’s a tragedy that too frequently at festivals bands leave slower songs off their setlist to appease an unfamiliar crowd, but Creeper, in their headlining slot, won’t let anything faze them tonight, and it’s a decision the audience is grateful for. Hannah Greenwood, though currently having medical trouble with her voice, delivers a performance of Crickets as beautiful and powerful as anything we’ve heard before. And it’s not the only moment that gets everyone in the crowd weeping, as Creeper also include the stripped back intro to Hiding With Boys and, for one of the most emotional moments of the 2000Trees weekend, there’s a rendition of I Choose To Live that’s sung along to with so much spirit that it surely echoes across the whole of the Cotswolds.

Even after this, the crowd aren’t ready for the set to be over and Creeper return to the stage for Black Rain and a cover of Meatloaf’s You Took The Words Right Out Of My Mouth. Black Rain is as brilliant as ever, restarting the unrelenting flow of crowd surfers across the barrier, and the cover is one of the most indiscriminately fun performances of this three day bonanza. Despite the fact that Creeper don’t have a second encore, and as result no one gets to hear Misery, the sense of community as crowds disperse and head to the main stage for the last band of the night leaves everyone with a lasting contentment.

Creeper are one of those bands who never fail to impress. Whether in a field or in an arena, they’re met with the same enthusiasm and the same love from their fans. The symbiotic relationship between every part of a Creeper show is what makes every single one so memorable, and it’s for definite that everyone who saw them at 2000Trees will go home with a renewed (or brand new) appreciation for the band.