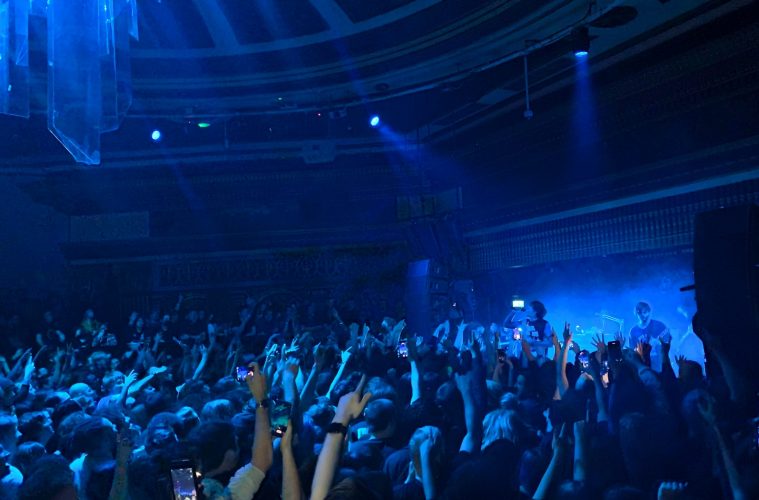 It’s been a year since the release of Bring Me The Horizon‘s Post Human: Survival Horror – and what a year it’s been. In the past twelve months, this EP has dominated charts, hitting the UK number 1 spot, as well as being named Best Album at the 2021 HMAs and the Sweetest release of 2020 by Bittersweet Press (a very, very reputable source). And, as the floor of Kingston’s PRYZM slowly fills with bodies, everyone is realising the exact same thing: after twelve long, long months, we can finally celebrate this glorious EP in its entirety.

As Bring Me take to the stage, it’s fair to say that the air feels electric – and, without a moment to catch your breath, its on. Dear Diary, bursts into life, and so does the crowd. Every mouth screams along, as Oli Sykes belts out every word like his life depends on it, truly throwing himself into the ferocity of the track.

As the set moves on to Parasite Eve, it’s clear that the evening is destined to be a back-to-back onslaught of scream-alongs and sweaty, thriving mosh pits. New tracks are met with absolute joy, Teardrops and Obey feeding into eachother without a hitch. Even the group’s latest single, DiE4u, has the crowd singing along from start to finish. A fierce standout on the setlist is Kingslayer, the kawaii-metalcore fusion an absolute hit live, infecting the crowd with an insatiable thirst for movement.

The night also serves as one of the first performances of One Day The Only Butterflies Left Will Be In Your Chest As You March Towards Death – a slow, lingering ballad. The crowd soak up the atmosphere appreciatively, climbing atop shoulders and harmonising with Sykes’ emotive performance. The song strips Sykes’ vocals bare, highlighting how greatly he has matured as a singer in recent years. The live setting also breeds new life into the track, as Sykes’ throws in some tasteful, impassioned growls into the bittersweet track.

Outside of the fresh EP, classic tracks are met with animalistic joy – MANTRA in particular threatens to crumble down the building as the crowd moshes along. Perhaps one of the most exhilarating moments of the set is Sykes’ simply lifting his hand up and ‘waving’ at the crowd… only for the crowd to realise, no, he’s not waving but Drowning. Queue the rumble of howls and immediate opening of mosh pits!

Sempiternal’s Can You Feel My Heart serves as a blissful, glorious closer. The classic track awakens a final burst of energy, as well as a new peak of chaos from Sykes. As the crowd scream along, Sykes clambers onto the side of the standing area, screaming along to the bridge with a fan, before throwing himself headfirst into the crowd below.

The set is a whirlwind, and the perfect way to finally celebrate Post Human: Survival Horror. As bodies pile out of the venue, there’s one thought on everyone’s mind: nobody does it quite like Bring Me.