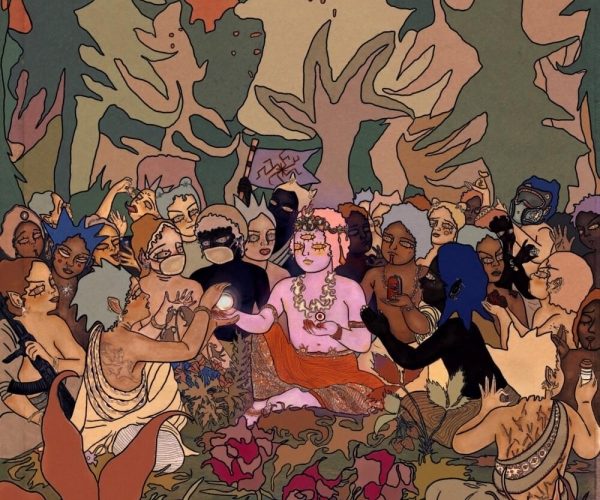 Not with a whimper but a bang – Bring Me The Horizon are back, and they’re geared with some of the meatiest tracks we’ve heard from them in a long time. Whilst we adored the innovative, experimental edge of 2019’s amo, latest EP Post Human: Survival Horror is nothing short of extraordinary; blending the fierce energy of their earlier records with their new-found adoration of all things electro, Survival Horror is Bring Me laid bare, a perfect microcosm of everything these Sheffield legends have to offer.

From the get-go, it’s clear that this EP is a winner. Dear Diary is relentless, a true homage to the group’s earlier sound (and an absolutely savage fuck you to anybody that claims Oli Sykes can’t scream anymore). As Sykes yells ‘it’s fucking boring!’ the energy of this track screams anything but – boasting sickeningly constant drums, Dear Diary is a non-stop barrage of white-hot energy. The track sounds like it could find a home on a remastered version of Suicide Season, capturing that raw, youthful energy and sprucing it up with the group’s contemporary, matured production. Sykes’ vocals truly make this track, leaving you in a sedated state of awe – there’s nothing quite as nostalgic as hearing Mr. Sykes’ signature screams, the effect heightened by that charming Yorkshire-tinge.

With a bundle of stupidly exciting singles already having been released of of the EP, the intro track only encourages a fire of excitement within you – Survival Horror is by no means a one hit wonder. The glorious sing-along-ability of Ludens was a delightful hint of what was to come, with a sprinkling of those much-loved growls, and Parasite Eve was a darkly anthemic soundtrack to the world’s end – both dampening our taste buds, teasing the EP that was soon to come. OBEY was perhaps the most exciting of the singles, a no-holds-bars bundle of energy, only heightened by the inclusion of Doncaster fireball Yungblud on vocals, creating a gloriously raucous moshpit-worthy banger.

Outside of the irresistible barrage of noise, there’s still so much more musical prowess burrowed within the confines of this EP. Teardrops harnesses a Linkin Park energy musically, creating a richly layered soundscape as Sykes’ vocals tackle themes of addiction and depression, while Itch is a pulsating spoken word interlude that bursts into a sunshiney burst of trance on steroids. We also hear from the marvellous Babymetal on Kingslayer, and the contrast between their adorably fierce vocals and Sykes’ relentless growls makes for a kawaii metalcore combination like no other. The lighter side only enhances the heavier elements, jumping between vicious calls of “WAKE THE FUCK UP!!” and gloriously melodic calls of ‘Kingslayeeeeer!’ flawlessly. The overall effect feels like being stuck in the matrix, a video-game worthy soundtrack spurring you on.

The variation in vocals also makes Survival Horror an absolute treat – while we’re treated to Sykes’ magnificent screams, we also hear some brilliant moments of singing from the vocalist. 1×1 is a calmer affair, but incredibly atmospheric, only heightened by the gorgeous vocal performances from the fabulous Nova Twins. Closing track One Day… also features the absolutely ethereal Amy Lee – and, honestly, her presence on the track weighs on your chest, her buttery smooth vocals immediately hypnotising you. Her performance is truly showstopping, and Sykes truly steps up to the plate; the pair perform a haunting ballad, their voices melding together faultlessly.

In many ways, this EP is exactly what you could want from Bring Me The Horizon, whilst not feeling stagnant. It feels like the embodiment of amo track Heavy Metal – these guys aren’t heavy metal anymore… they’re whatever the fuck they want to be. They can still scream, but that doesn’t mean they’re going to limit themselves from performing a hauntingly beautiful ballad between Mankind and Mother Nature, or create an absolutely killer videogame-worthy track. This is an EP that tries to push boundaries, whilst still harnessing the core values of the Bring Me lads – and we think it’s pretty bloody good.

Post Human: Survival Horror is out now. Get it here.