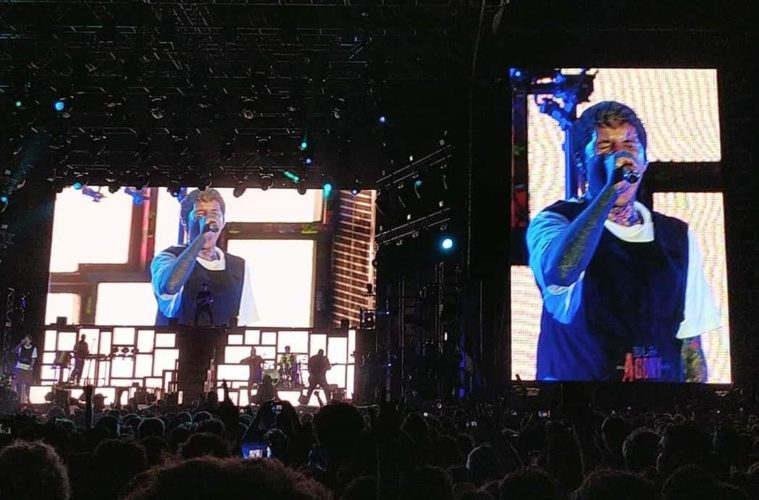 Bring Me The Horizon, All Points East, Victoria Park,
31st May 2019

It’s been a hectic day; be the band up -and-coming like the enchanting Yonaka or fierce Lotus Eater, or scene staples like While She Sleeps or Architects, every crowd of the day has been wild. A truly exquisite selection has blessed All Points East today, every performance showing just how thriving the rock landscape is at the moment. As everyone mulls over the amazing day they’ve had, they gather excitedly before the main stage for the climax of the day— Bring Me The Horizon’s first ever festival headline set.

The sun is still shining when the Sheffield quintet announce their arrival with the vigorous MANTRA. The crowd bursts into song, screaming their hearts out. The first moshpit of the night opens up for Sempiternal favourite The House of Wolves, everyone eager to thrash around and screech into one another’s faces.

One thing that is incredibly admirable about the set is how self-aware Bring Me The Horizon are of their ‘controversial’ new album. They blast the screens with harsh amo reviews, making the crowd fizzle with laughter, before crashing into Diamonds Aren’t Forever to remind everyone that their old songs will always be a part of them. These guys may be progressing forward musically, but will never let go of the old favourites that turn the crowd into a whirlpool of chaos.

The fact that this is a HEADLINE set is also definitely taken advantage of: Dani Filth makes an appearance for Wonderful Life, fully decked out in his Cradle of Filth gear, everyone in the crowd ecstatically yelling ‘BUT EVERYBODY KNOWS I GOT BOUNCE’ along with him. We are also blessed by the iconic The Sadness Will Never End, Sam Carter making his second appearance of the day after Architects’ set. The excitement in the crowd is tangible, everyone drinking in this special performance of a song not touched since 2016, screaming ‘I WON’T GIVE UP ON YOUUUU!!!!!!! … SO DON’T GIVE UP ON ME!’

Oli Sykes’ gratitude is made more than obvious throughout the set. He takes moments to thank everyone wholeheartedly, talking of how the band has ‘saved [his] f***ing life’. His love for Sempiternal pours out, Sykes openly crying on stage and thanking the fans for making it such a special album. The band then play an acoustic version of Sleepwalking, the entire performance emotionally charged and truly magical.

A noticeable thing about the crowd, however, is the minimal moshing. Certain circles are dotted throughout the crowd, but there doesn’t seem to be a common placed interest in movement. Songs like Can You Feel My Heart and Pray For Plagues generate fabulous pits, Antivist even having a wall of death, but certain tracks don’t have as much moshing as one would expect. Shadow Moses, for example, feels quite shockingly stagnant further back in the crowd. At some points Sykes tries to encourage the crowd to ‘push it back’, but there isn’t a strong enthusiasm for movement amongst everyone, sadly.

However, that doesn’t take away from the joy people seem to be experiencing. Just having a boogie to songs like Nihilist Blues seems to be enough for some, singing along and dancing to their heart’s content. Closer Drown also doesn’t have moshing, but everyone sings along beautifully.

There is a general murmur of disappointment over Chelsea Smile being cut from the setlist, but it doesn’t dampen the spirits of everyone present. Bring Me The Horizon have just headlined their first festival, and it certainly feels like a long time coming. These guys have truly earned this slot, and they absolutely owned it. They’re a headline act through and through, and we can’t wait to see them headline even bigger festivals in the years to come.