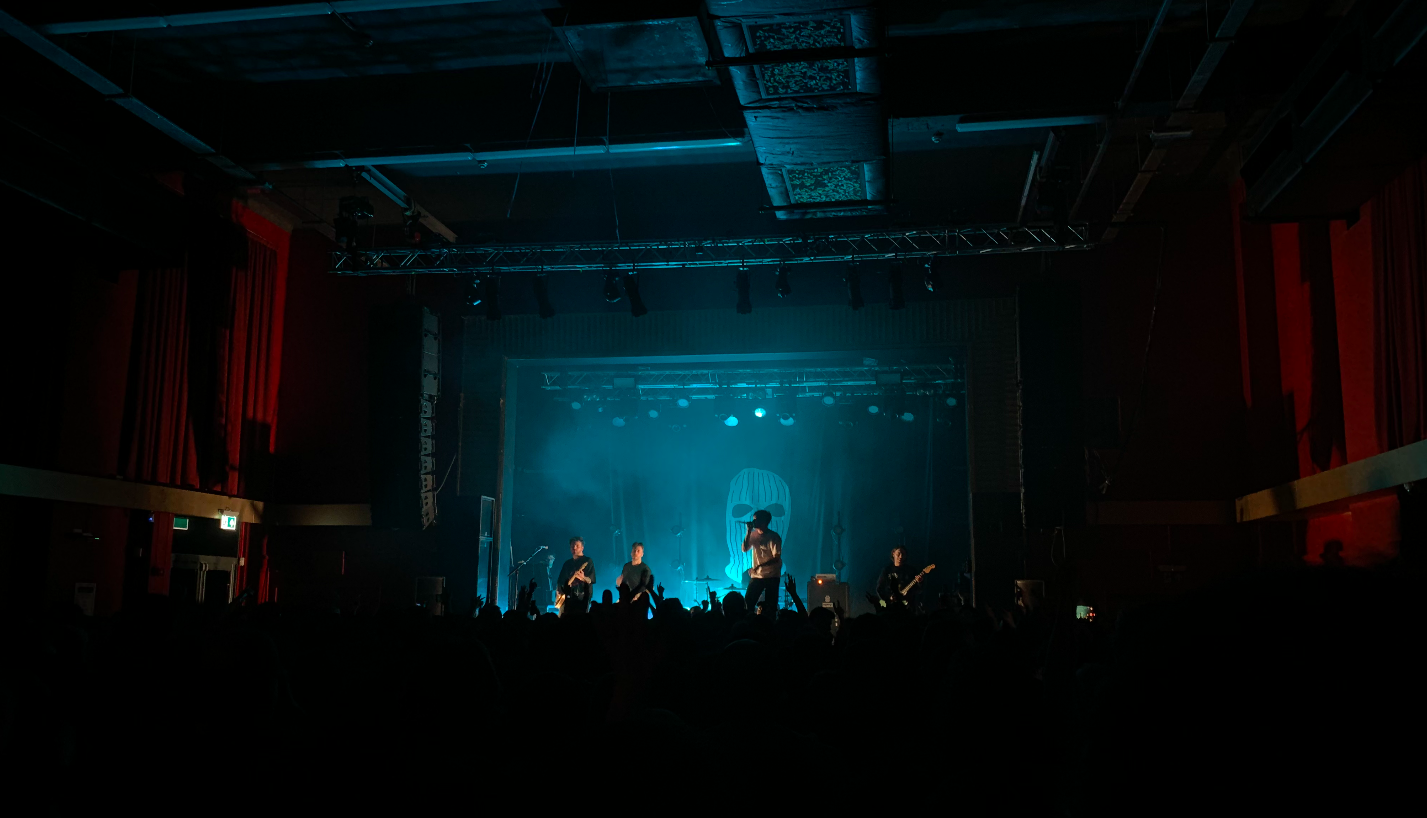 Boston Manor, Movements, Jools @ Manchester Academy 2, 11/2/22
Boston Manor have done a scorcher of a job before the lights even go down. Manchester’s nigh-1000 capacity Academy 2 isn’t famed for its character, but as one of the city’s larger-but-not-massive venues, it is the perfect setting for bands who are absolutely beloved by a cult following to make the room theirs for the night – the atmosphere emanates not from the walls or any disco ball fanciness, but from the passion of the people that fill it. And that’s what Boston Manor’s show this evening is start to finish – pure, unadulterated passion from the best band in British rock right now.

This tour, as frontman Henry Cox wastes no time in telling us, is one of the most rescheduled the promoter’s ever seen, and the band haven’t played in Manchester since 2018 – so fervour is soaring from the get-go. Fortunately, Boston Manor have brought along some mates who are raring to help us get some of that pent-up energy out before the main event.

JOOLS kick things off with their glittering art-punk, which feels of a magnitude far greater than the space we’re in, before Movements, who’ve come all the way from the US, take the energy up a notch. Boston Manor are part of a tightly cultivated community of alt-rock fans here in the UK, and it’s clear from the audience response that Movements are a part of that beloved canon too – No Good Left To Give, last year’s full-length, finally gets rolled out in all its glory, and it’s a dark, delightful half hour of Movement’s emotionally charged tunes. We’re definitely left wanting more, so anticipation for the main event reaches a fever pitch – and then out rings the opening of Everything Is Ordinary.

GLUE, Boston Manor’s lockdown magnum opus, hasn’t had its victory lap yet – it’s the band’s most experimental, boundary-pushing release to date, but we’ve all had to sit with it for 18 months before getting to digest it in the flesh. But it’s immediately clear that this. This is how it’s meant to be heard. Some of the sharper production flourishes are lost to the noise of a live setting, but it’s maybe because we’ve listened to the record so much that the atmosphere they created so effectively on record still permeates their deliver. You, Me & The Class War is an easy highlight, and the moody thrum of tracks like On A High Ledge are all the more striking with a thousand-strong roar of backing vocals.

The range Boston Manor’s discography spans also gets a thorough parading around tonight – choice cuts from debut album Be Nothing. are, as always, a treat. And not just the crowd-surf mania of Laika either, but Burn You Up and Lead Feet prove their longevity – as hard-hitting as Boston Manor’s developing style of intensity, and totally symbiotic too. Boston Manor are well aware of their roots, and it’s this confident handling that’s allowed them to grow from them and thrive so hard.