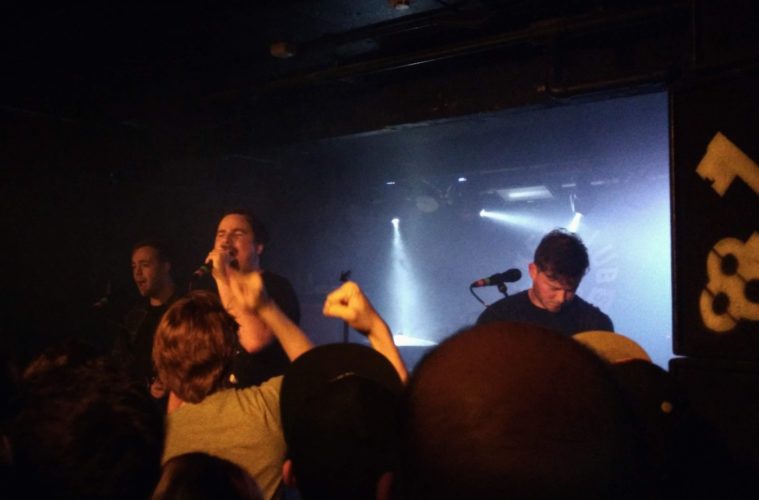 There is no better setting for a rock gig than Key Club. Every Black Peaks fan in the room is eager to experience the new tracks from October release All That Divides, and is quietly thanking the gods for being blessed with such a welcoming and appropriate venue. The low ceilings, dark walls and teeny stage create the perfect balance of grungy and cosy – not many places can feel edgily intimate in quite the same way. With this in mind, one can’t help but think of how appropriately the room reflects Black Peaks as a band: a growling progressive rock outfit that always feel like old friends due to the musicians’ charming personalities. The moment you set eyes on the stage, you just know you’re in for a treat.

Gold Key open the night, greeting the fans with psychedelic infused rock tracks paired with lovely, smooth vocals. The second support act Bossk have a slightly less conventional stage presence – opting for lighting that reduces them to silhouettes in a way that adds to their strange, atmospheric, instrumental performance. Bossk stop playing entirely perhaps twice; why pause when you can be bewitching your audience with the sound of a disembodied, eerie guitar?

Not that anything can quite prepare us for Black Peaks. Coming out to Can’t Sleep, everybody is beyond excited to finally be able to scream ‘no, I can’t sleep at alllllllll’ in a place other than their own bedrooms. The Midnight Sun and Electric Fires are met with just as must enthusiasm, visibly lifting the band’s spirits – it must always be terrifying to release new content, and ever so gratifying to see it accepted so wholeheartedly. The band take a moment to voice their delight, asking the crowd, ‘where have you all been!? Last time there were only 30 of you and now look!!’

The first crowdsurfer of the night, however, does choose to pop up during an old classic – electing to scream along to Crooks atop the headbanging crowd. This is the first surfer of many, the flood gates truly opening for Saviour. One fan is so eager to stay afloat, he quite literally koala-clings onto a pipe running along the ceiling. This forces the band to give a jokey warning that it ‘might be a s**t pipe’ and that we should probably try to avoid it if possible… Oops. It just can’t be helped if your music makes the crowd that hyped up!

The best song of the night is definitely Glass Built Castles – it causes everybody in the room to move; even those leaning against the bar become unable to resist the violent energy of the song. The yells of ‘YOU’RE BLINDED IN THE NIGHT, YOU’RE GIVING UP YOUR FIIIIIGHT’ feel like they’re permanently embedding themselves into your eardrums, they’re that powerful. Home closes off the night nicely, dragging just as much enthusiasm as Glass Built Castles despite it only being out for a few weeks.

This excited reception of newer tracks show just how much love there is for Black Peaks. With such a supportive fan base, these Brighton lads are sure to continue rising up through the ranks. Their live performance is superb and they truly deserve to keep growing – and there’s no doubt that they will.