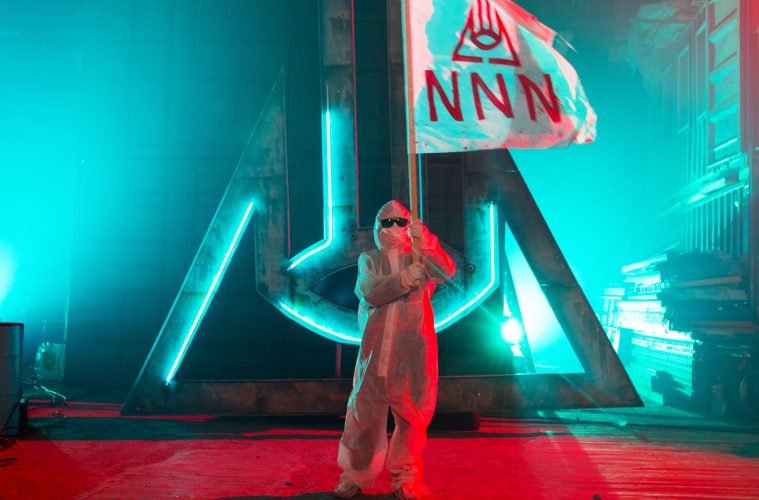 Black Futures – Never Not Nothing

Black Futures, Never Not Nothing
Music For Nations

Black Futures’ long-awaited debut is here, and we’re in awe. Never Not Nothing is a space-punk extravaganza, every track so jaw-droppingly immersive that you’ll be sucked into a synthy post-apocalyptic wormhole within seconds. The album absolutely oozes creativity, passion and clearly embodies the notion of a ‘black future’ – the only complaint we have is that it ends far too soon.

Opening track N.N.N is truly masterful; the track builds tension gorgeously, the synths and meaty bassline combining to create a rich, full sound that is successfully maintained throughout the album. The opener sounds similar to S U R V I V E (the guys that composed the musical score for Stranger Things) but Black Futures very much set themselves apart when it smoothly transitions into the more obviously rock infused Love.

Love feels like a space chase, the amazing drums driving the song and building upon the opener’s tension. As the gang vocals scream ‘10 MINUTES TIL THE END OF THE WORLD’, you feel yourself being dragged out of your skull and shoved into this futuristic rebellion – by the time the industrial breakdown is in full force, the space anarchy is in full swing. Body & Soul also captures this space chase energy, but somehow finds a way to create an even more chaotic, industrial robotic-rave breakdown.

The futuristic vibes of the album are only heightened by tracks like Me.TV and Riches. Me.TV, a Kasabian-esque track that is the most conventionally ‘rock’ of the bunch, speaks of a ‘Me.TV’, a metaphor for ones’ notion of the self that also doubles up as an odd new piece of tech. Similarly, Riches has an ad break that further drags you into the post-apocalyptic world; the advert reinforces the notion of what Black Futures’ future is like, shoving capitalism down the public’s throats – the moment also feels reminiscent of Danger Days’ levels of immersion.

In terms of revolution, Gutters feels like a true call-to-arms. Gang vocals draw you in, the catchy call of ‘we’ve got our minds in the gutter!’ begging you to sing along in response. Gutters has minimal lyrics, but this choice allows the instrumental choices to shine: the booming kick drum beckons you to march along with the rebellion, whilst the mad breakdown after being told ‘now get down….. knock it down….’ is sure to have a WILD response at shows.

Instrumentally, Karma Ya Dig!? is also an absolute treat. The track is velvety smooth, echoing vocals welcoming you in and making you feel like you’re moon-walking. Angelic backing vocals throughout make add layers to the song, making it feel like an endless universe is inside of your earphones. The song is one of the softest of the album, but it’s definitely hypnotising.

One thing that stands out about this album is the issues tackled and the fear that they will never be resolved. For example, Youthman confronts how the youth are demonised and blamed for everything, when in reality many of the issues trickle down from older generations. Closing track Power Drunk only hammers home their views, the reality of their name being thrown into the mix as they say that ‘I think we’re too late… I think we’re about 100 years too late’, the light sound juxtaposing the incredibly bleak theme of the song.

Never Not Nothing is an incredibly unique album that knows exactly what it is; Every element is flawlessly pieced together to create an entire world in just 39 minutes. The production is beyond impressive for a debut and speaks volumes: Black Futures are new, exciting and the future of rock music.

Never Not Nothing is out now.