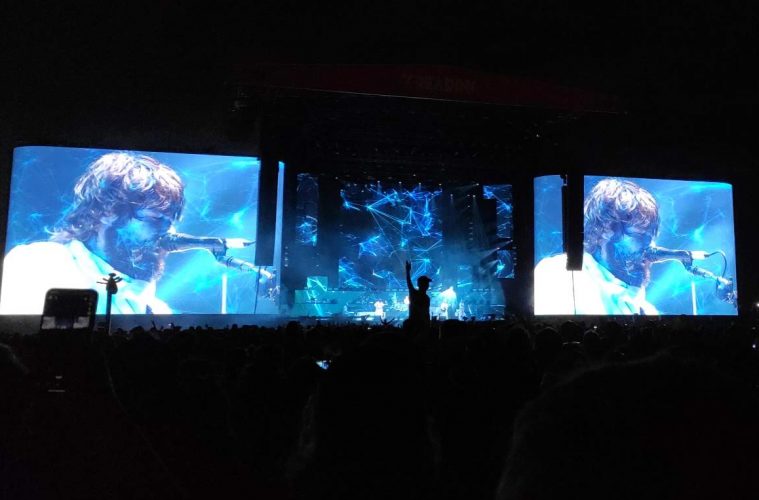 Fresh faces seemed to dominate the Reading & Leeds scene this year; from the fierce Nova Twins, to the raucous Wargasm to the enraged poetics of Bob Vylan, festival-goers were treated to the very best of the up-and-coming rock scene. But then begs the question – what about the classics? Reading undoubtedly is a platform for new sounds, but who is going to top it all off with some well-loved sing-alongs and a flare of grandeur? Enter Biffy Clyro.

And grandeur is indeed delivered – Biffy’s entrance is marked by a storm of guitars and a blast of colour, immediately setting themselves apart from the other acts of the weekend. Not only are the trio perfectly suited for the slot (having headlined twice before), but they truly put on a performance – delivering spellbinding visuals, an electric lightshow and non-stop singalongs.

The set also serves as the first time 2020 release A Celebration Of Endings is being played to such a huge crowd – and every ‘new’ track is met with howls of enthusiasm. As their iconic lightshow colours the field in waves of blues and pinks, and Simon Neil’s rough vocals ring out over the speakers, tracks like North Of No South and End Of enchant the crowd just as much as the classics.

Perhaps the most exciting part about Biffy Clyro is how drastically their tracks change in a live setting. Songs you love turn into visceral, growling beasts – Wolves of Winter in particular opens with an impassioned screech, before those live instrumentals absolutely punch you in the gut. As a general rule of thumb: by the time Simon Neil’s shirt has come off, you know the set has reached its peak.

Even classic tracks like Mountains, Bubbles and Many Of Horror take on a new shape – mainly due to the sheer volume as the crowd screams along.  The tracks take on a whole new level of depth, Neil fighting against the crowd’s deafening harmonies. Fans new and old take on the challenge with a renewed vigour, putting their all into the closing half of the set. Yet still Biffy have more to deliver – bringing out violinists and a cracking blast of fireworks to close off their magnificent set.

The trio parade the stage like it’s a home away from home, and they have entirely earned the right to do so. As the final note rings out across the field, festival-goers bask in the glory of Biffy Fuckin’ Clyro. These guys are truly in a league of their own.