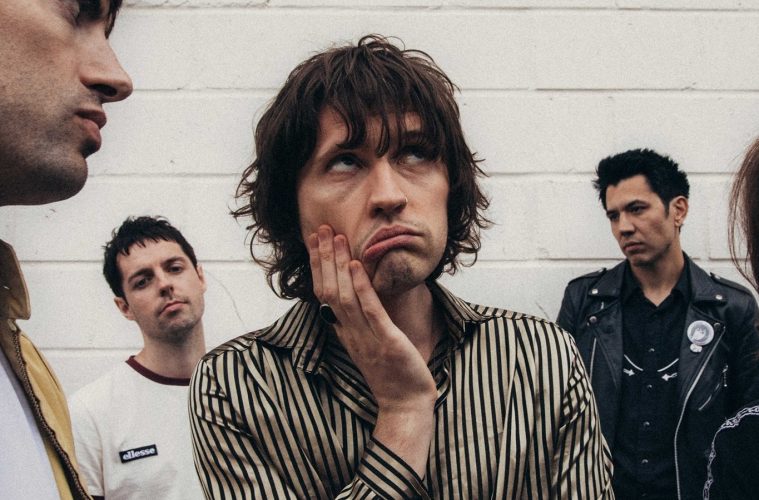 The spirit of rock’n’roll is alive and well, and it lives in Bad Nerves. Fierce, fast punk tracks coming in at under three minutes of thrashing riffs and infectious hooks each constitutes the lifeblood of their upcoming self-titled debut, and it’s not just the music that’s total punk either. When Bittersweet Press meets the band’s own Bobby and Sam, it’s 20 minutes before Bobby even wakes up and remembers he has an interview – but it’s well worth the wait. Cheeky and charming, Bobby and Sam walk us through politics, tour tales and their record.

Tell us about the title! Why Bad Nerves?

Bobby: “We weren’t ever trying to think up a title, we all just thought we’d call the first one Bad Nerves. We didn’t think it needed a name cos it just sums up how we sound! The next one will sound nothing like this one, so maybe we’ll change the band name.”

So how does the Bad Nerves sound come about?

Bobby: “I sit at my computer with the track playing. If there’s something I’m feeling or thinking about, that’s just what I say, and the melody comes with it! Big questions I should know the answer to, where should I be, should I be doing this, am I doing the right thing, what do I have to do to be happy… it’s a bit philosophical! But I don’t like to be too bluntly obvious. You don’t have to have the vocabulary of someone from Oxford University. Just say what you feel.”

So out of all the fast and furious tunes Bad Nerves have packed into their record, how did they pick their favourites to release? Democratically, of course.

Bobby: “I wanted Baby Drummer cos it’s a little bit different to what people had already heard. We didn’t wanna just put out a carbon copy. But Electric 88 wasn’t my choice, I was overruled!”

Sam: “That one was a must for me! I remember it really clearly, we just played it on guitar and vocal and I just had to run behind that kit faster than you’ve ever seen. If it made me feel like that… I’m a horrible bastard and it did that! So it had to be…”

Sam: “You’d love a ballad though!”

Bobby: “I like a ballad but I don’t write songs that are under 120 bpm! I’ve written a few ballads with piano but I don’t know if Bad Nerves fans would appreciate that shit!”

Talk to us about your influences then – who made Bad Nerves as fierce as they are?

Bobby: “There’s a band called Radioactivity, and Jay Reatard, and they’re so popping and so adrenaline-fuelled and I’ve been trying to find something like that for years. Something that could satisfy my need for a hook, but also to nod your head to. Heavy music, the melodies are a bit crap, pop music is just too nice, there’s no dirt and no character. But those two bands laid the foundations… like shit, you can write catchy songs and still be a rock’n’roll band! All we wanted to do was write as fast as we can and not fuck around. No intros, no outros, no long choruses!”

It’s not just bands that have inspired Bad Nerves – the London punk scene has been formative too.

Bobby: “[We loved] being surrounded by those people, and we’ve found so many other bands through them, it was nice to have a little community cos we hadn’t felt that in years. Sometimes it’s quite unnerving to play to cos they’re all just standing there in their leather jackets! When we supported Marked Men, we couldn’t wait to play with them, but when you’re playing a room full of 30+ year old men and you know they know their shit, love all the music that you love, and you’re thinking god I hope this isn’t shit!”

Obviously, with tunes so energetic, we can’t help but start talking about gigs – how are Bad Nerves feeling about releasing a punk album when they can’t see any mosh-pits to it?

Bobby: “Well I don’t think anybody expected this pandemic thing, I never expected anything like this in my life!”

Bobby: “It’s not ideal really. The music’s so fun to play live, probably the most fun I’ve ever had playing in bands, it’s just about pure vibe. It’s a bit shit putting it out and not being able to go and play.”

Sam: “I think it just provides more excitement for next year, when we come back we’re just gonna go ten times harder. Imagine how fun that scene is gonna be next year!”

Bobby: “I just miss that vibe of a gig, everyone crammed into a tiny room going crazy!”

It’s not long before the nostalgia starts to flow…

Sam: “Where was it we jumped out, and it was like… you’re playing NOW.”

Bobby: “Yeah, Amsterdam! Cos that’s when all those riots were going on, the yellow jackets!”

Bobby: “We got to Calais and there were just people on the road running around, it took us maybe 11 hours to get there and we got there at midnight and we had to play immediately. You take it for granted, but you miss it. Even sitting in the van for ten hours!”

Coronavirus isn’t the only thing stamping all over musicians’ touring careers either.

Bobby: “We were worried about Brexit before! Because we’d have had to get VISAs and all that, even before COVID people were worried about Brexit and how it’s gonna fuck over musicians. We’re not gonna be able to afford to go and play in Europe cos if you’re in a small band you don’t get paid enough to cover all the costs. You’ve gotta have paperwork for every bit of equipment, which costs money – it’s already hard enough to go to Europe and make enough to cover it, but now it’s gonna be impossible.”

Sam: “I’ve still got hope to be honest. I think there’s gonna be some legislation put in place that means we actually can do this without too much extra.”

Bobby: “No one knows what the fuck is going on!”

Sam: “Just keep writing Bobby, that’s all you can do.”

Bobby: “There’s nothing else I can do! It’s the only skill I have!”


Bad Nerves is out November 20th, and in the words of Bobby: “listen to our album, buy it so I can be rich.”