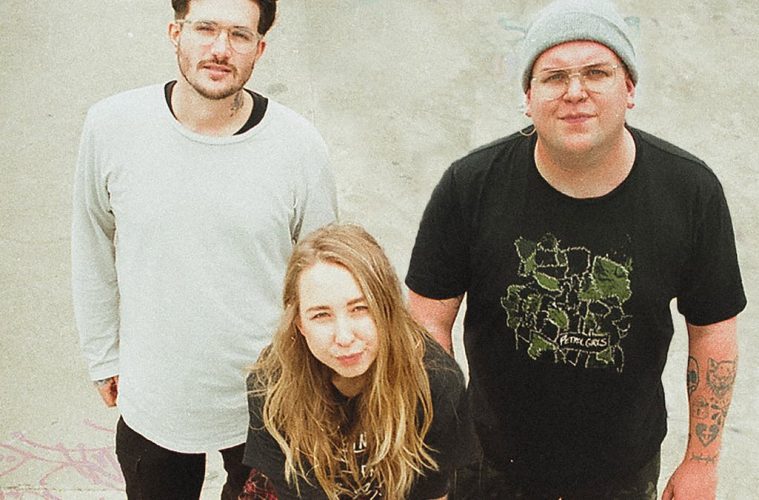 “An Antidote To Abuse” – Becky Blomfield on Milk Teeth!

Fresh off the release of their eponymous sophomore album, Milk Teeth should be basking in well-earned success – it’s a scorcher of a record, embodying the emotional process of creating it so tangibly and saturated with the band’s signature blend of grunge, punk, and charisma. Unfortunately, the world is currently upside-down and times feel less than celebratory, but we caught up with Becky Blomfield, the vocalist, bassist, and driving force behind Milk Teeth, for a chat about the immense achievement that Milk Teeth (the album) is and where Milk Teeth (the band) are at.

The record is deeply personal, and all the more powerful for it – “an antidote to abuse” is how Becky would describe it herself. “It’s a heart on its sleeve record, with heavy 90s alternative rock influence. I wanted to write a record that sounds like most of the music I listen to that doesn’t exist anymore.”

Milk Teeth’s influences have definitely allowed them to create their own niche: “I think we’ve always had a distinct sound, and been fortunate that we’ve had room to move between genres and not get stuck in one box. It’s boring to make the same thing over and over.” Contributing to their developing sound has been an ever developing lineup, now comfortably established as Becky, Em Foster and Jack Kenny – a dream team in Bittersweet’s book! “It still hasn’t sunk in fully as there’s been trails of turbulence still loitering in the background even with a more positive group of people,” Becky says of working with her new bandmates. “We were fortunate to have made friends when we all toured together and it was the most natural fit, Em and Jack joining, as we already had a connection outside of Milk Teeth’s sphere. Our friendship has always been more important than Milk Teeth.”

The Milk Teeth foundation is now as solid as it’s ever been, and while the album’s been in the works longer than the current gang have been together, it still shows. “It’s been three years in the making. I had the songs written pre lineup changes and stuff got amended through different amalgamations of the band. I think our songwriting and sound on this record is the strongest and most self-assured it’s ever been. I feel proud to know that it’s progressed as we’ve experienced more and become assured of who the band is.”

The album’s certainly been a long time in the making, and emotionally charged with all the experience behind making it. “It’s cathartic to creatively turn those experiences into something,” Becky says of the challenges and benefits of making the such a personal album. “Enough of it tortures my brain still most days, but at least having a release in some way allows it to not all be stuck up top. Writing songs has always been my go to for expressing the things I can’t always in other ways.”

Having just released such a powerful album, it’s deflating that Milk Teeth have had to postpone their post-release tour indefinitely due to the coronavirus outbreak: “It sucks because I was looking forward to hanging out with our friend Koji and meeting Potty Mouth for the first time, but there’s no use wasting energy on what cannot be right now, focus on saving as many people’s lives as possible and slowing down the spread.” There’s still something to look forward to though – hearing all the new bangers live! Though it may not actually be the first time… “We’ve already snuck a bunch of new material into our set over the past year but it will be cool to play more new songs that haven’t had their live debut.”

Having to cancel tours is a huge knock for any band, though, even if they’re coming a bit later. For us as fans, we’ll just have to be patient, but for the band and crew, it’s potentially devastating. “It’s affected everyone in this industry”, says Becky, “touring is the main way for artists to make money in the music industry at present as streaming provides such small figures in the way of income unless you are getting millions and millions which isn’t the case for most people. Whether people are techs, musicians, roadies, venue owners, drivers, van rental companies, tour managers, etc, it’s hit everyone pretty hard.

So now sounds like a pretty good time to be supporting your fav bands where you can. Bandcamp recently waived their cut of revenue made off bands’ sales, though just for a day. “I think it should be a more regular occurrence, though it didn’t go unnoticed and was a positive thing to do.” says Becky.

Even though Bandcamp’s gesture was just one day long, there’s still plenty that artists are doing to keep morale up as well as trying to make up for lost income: “I’ve watched a few live-streamed shows myself. We’ve been live-streaming to chat with people as much as possible.” It’s not as easy as people think for bands to try and make up this time though – “I’m currently working 50 hour weeks still, as my job outside of music is not an industry that has come to a standstill, so I’ve not had much energy to be online when I get in, but will endeavour to do more when I can to provide music or something acoustically on our socials. My partner is currently out of work so we are reliant on my income now more than ever.”

How can we support Milk Teeth then? Fans of the band will definitely be eager to know that merch is still shipping from both the band’s bigcartel (run by Becky herself) and their website, so if you’ve ever fancied one, now would be a prime time to cop some merch – and it’s pretty sick if we do say so!

While lockdown is definitely a horrible thing to go through, we’re lucky that we’ve got bangers like Milk Teeth to soundtrack it – but what does Becky recommend? “I’ve been listening to ’ GREY Area a bunch and Cartel‘s Chroma, as it takes me back to being a teenager.” Fine choices – did we expect any less?

Finally, we look forwards, and while things look bleak, Becky’s hopes are optimistic: “I hope that the government shows society more respect and support than they have done after COVID-19 and that this brings about some positive change. It’s fucked that it’s taken a pandemic for this to be realised.” And in the Milk Teeth world? “I hope that people find the record and make memories with it. I don’t ask for a lot with our music, I’m just thankful if someone lets it into their life.

Milk Teeth is out now – and if you fancy purchasing a physical copy, they’re available here!