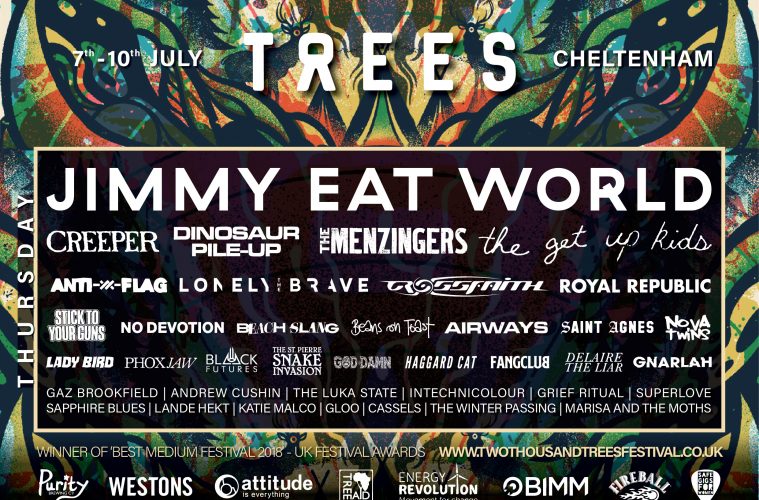 Consistency is just one of the ways we’d sum up the magical weekend in the woods that is 2000Trees festival – they’ve never faltered, providing glorious lineups and incomparably good vibes year in year out. Even the nightmare that is 2020 saw the fab 2000Screens, and as the fest reveal their lineup over this week, it looks like 2021 is going to be a return party not to miss.

As well as the early announcements of returning headliners Jimmy Eat World and Thrice (playing Vheissu in full, no less!), Trees are spending this week dropping an almost-complete selection of the acts coming up for next year’s festival. Today, they’ve revealed Thursday’s assortment of the best of all corners of rock – and it’s hard to believe it gets any better!

Returning from last year are emo heroes Creeper, who were set to blow away 2020’s crowd following the release of Sex, Death and The Infinite Void – and who will definitely be just as incredible a year on. Joining the gang of icons on Thursday we’ve got The Get Up Kids, and Lonely The Brave who’ve recently returned with a bang. Political-punk legends Anti-Flag will be there, and they’ll be angry, so gear up for some mosh-pits like no other – but don’t forget to save some energy for The Menzingers, who are also set to tear up the night.

As ever, 2000Trees is about far more than the big bands on the bill; it’s the smaller names that you’ll walk away with as your new favourites! Returning names (from both 2020 and from wowing crowds years before) include the invincible Nova Twins, delightfully energetic Fangclub, pop-punk rising stars Airways – every facet of the scene is covered. Bittersweet favourites litter the lineup: Black Futures scored a top three album on Bittersweet’s 2019 roundup and there’s no doubt they’ll be top three acts at Trees; Lande Hekt is as brilliant on her own as she is in Muncie Girls and she’ll be brilliant on stage too; Lady Bird’s riot-punk, Cassels’ ferocious DIY, it never stops!

And that’s only Thursday. If we know Trees (and we do!) they’ll outdo themselves again and again. All that’s left is to do is keep our eyes peeled and build the hype for the Friday and Saturday!

Get your 2000Trees tickets at a discount for a limited time here!