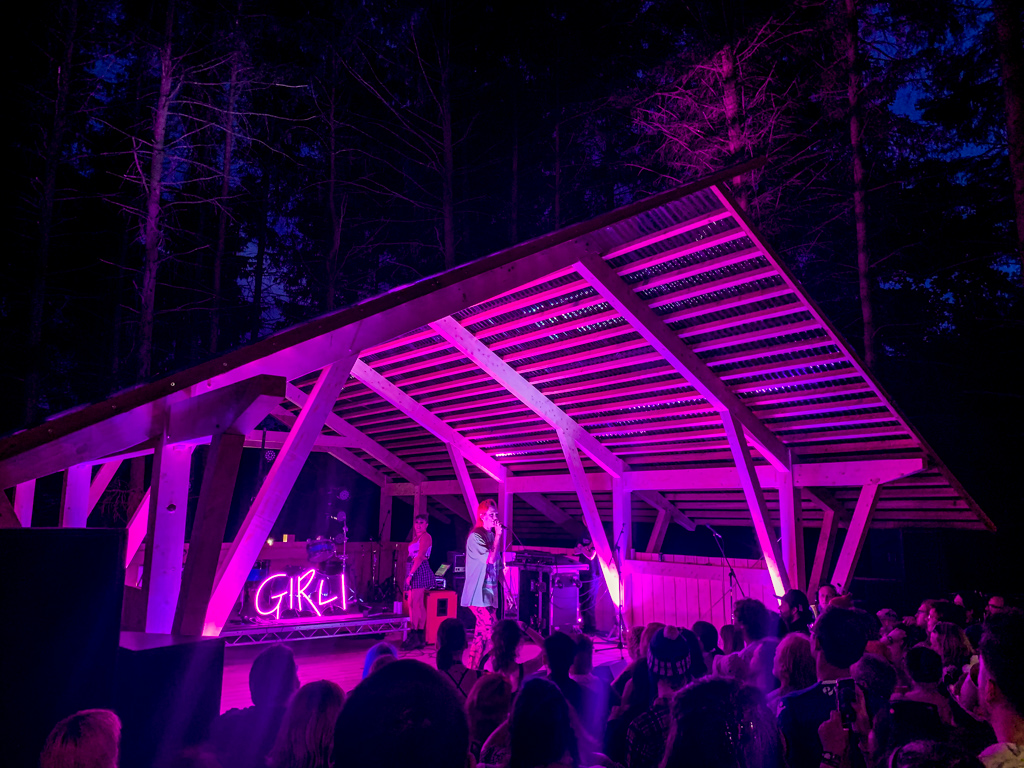 2000Trees’s second morning waits for no-one – the sun is beating down, that all-too-familiar feeling of being slowly baked out of your tent is here with a vengeance, and the queue for the watermelon stand is round the metaphorical block. But the greatest motivation 2000Trees offers to brush off your hangover and power through is, of course, the bands that are on first thing. Yep, this lineup waits for no one.

Energy and spirits are high. And they have to be, because our day starts with the Cali surf-punk stylings of Together Pangea. The scrappy surf-punk vibe is always a delight at Trees, giving the crowd a moment to let loose in the most carefree way, and Together Pangea kick Friday off with a promise that today is going to be brilliant chaos.

Over to the welcome shade of the cave for a bit of sonic darkness as well, courtesy of upstarts James and the Cold Gun. Boasting just enough old-school rock-and-roll glam to put on a proper show alongside the drama of their tunes, there’s an easy promise of a future headline set in here, and the crowd certainly seem to agree – there’s actually a lot of people in here belting out every word as if they are headlining already. Talk about starting on a high, too, because The Cave also gives us Petrol Girls this morning, who get everyone front to back on their feet for their essential selection of punk vitriol and passion.

Punk, vitriol, and passion, we’ll find, are trends for today. And they’re continued with Salem in the Axiom – Will Gould of Creeper’s horror-punk side project, a tearaway set packed with the best of the band’s two eponymous EPs. With riffs galore, sexy, snarling lyrics and a floating head above the crowd probably also yelling every word, Gould brings every bit of charisma from yesterday’s main stage into this tent.

KennyHoopla’s searing emo/pop-punk cocktail has been a fixture on rock lineups since his breakthrough last year, when we were all at our most desperate for a good emo singalong. And the Trees crowd are just as ready as always to go mad, and KennyHoopla’s infectious, scream-along choruses are more than up for the job. As the irresistible likes of estella//, silence is also an answer//, and hollywood sucks// ring out, we’re reminded that the new guard of pop-punk (under the watchful eye of Travis Barker, of course) are a good bunch to take us forward.

The same goes for the electrifying set of artists we see next. Kid Brunswick at the NEU stage and Calva Louise over in the forest are both part of the searing rock music plus high production and electrifying energy gang, and they both deliver on the riotous promise they make on record. Kid Brunswick, in particular, shoots for stratospheric levels – every bit the rockstar with a bitingly moody demeanor and omnipresent sunglasses, the NEU stage at first don’t quite know how to respond. It’s worlds away from the humble, chatty vibe this stage usually packs, but things heat up to boiling point as it becomes apparent that this isn’t an NEU stage set, this is Kid Brunswick practicing for his main stage set – pending.

That brooding charm is quickly swapped out for some pummelling, staggeringly beautiful mathcore over on the Axiom. Rolo Tomassi’s set is a bittersweet delight, flowing between soaring, glittering instrumentals and crushing breakdowns with ease. Eva Spence’s vocals have the crowds enchanted, the masses transfixed by ethereal harmonies before delighting in the gruelling bite of her growls. The group’s February release, Where Myth Becomes Memory, is the focal point of the performance – and the new tracks are somehow even more spellbinding live. The entire set is one long, giddy ‘pinch me’ moment; from opener Drip, right up to the introspective beauty of closer Cloaked, every note is spot-on. Nobody’s doing it quite like Rolo!

Over on the main stage, the formidable crash of Carbon Mono marks the start of Boston Manor’s set. The slot serves as an upgrade from their last stint in 2018 in the Cave, and they immediately make their presence felt – knocking out a high-energy set that has the crowds singing and dancing along from start to finish. From classic tracks England’s Dreaming and Funeral Party to the sparkling new Foxglove, fans eagerly croon along like their lives depend on it. Even the live debut of Passenger is met with acclaim, the excitement over what’s next from the Boston Manor boys vibrating through the crowd. But, while the future may be exciting, you just can’t resist some staple anthems – and closing the set with the impossible-to-beat combo of Liquid followed by Halo is total bliss.

Back in the NEU tent – now, why are we here? There have been a lot of bands packed to overflow, but Bob Vylan practically create a road block to the main stage with how many people are spilling out. Everyone is prepared for one of the weekend’s most unmissable, vital sets, and definitely one of the most special sets, because Bob Vylan’s magnitude is so much larger than this space that it feels like a one-time experience just to be here. Though their music is relentlessly intentional, laden with fierce, essential commentary, the set is still also as entertaining as it gets. Those sitting around waiting for it earlier may have witnessed Bobby somehow scaling a fence with an RC Helicopter that’s flown off course, which he returns to its young pilot on stage; it’s a cheerful moment of connection and wholesomeness in a set that’s primarily fierce. But despite the rage and intensity that fuels Bob Vylan’s music through and through, the crowd are still led to groove and dance by Bobby’s immensely charismatic performance. And when we’re invited to join him onstage to close the set, it’s the final shred of proof that Bob Vylan are pushing the confines of this stage to a literal breaking point.

The sunset slot – more magical at Trees than Glasto, surely! – goes to Turnstile today, and it’s a fitting one. For a band who’ve turned hardcore and punk into ethereal magic and back again on last year’s landmark GLOW ON, they’re really glowing on the main stage this evening, with one of the largest crowds the main stage has seen so far. As official co-headliners, we’d expect nothing less, but there’s a total sense that everyone here loves Turnstile – even right at the back, folks are singing every word and going for it like they’re in the front pit. And for those lucky enough to have made it down the front, it’s just next level… Gold wristband, anyone?

Trees and Vukovi are a match made in heaven. If you’ve ever attended 2000Trees and not seen Vukovi… well, firstly, we’re shocked, but mainly we are just deeply disappointed in you. Vukovi’s furious brand of relentless pop-rock is festival gold, every track tailor-made for a moshpit. And the duo’s energy only makes their sound more enjoyable – vocalist Janine Shilstone a total firecracker, full of a sharp charm that the crowd adores. There’s also a special guest appearance from some Trees royalty, Shilstone eloquently crying “IS THAT THE FUCKING FRIDGE?” before encouraging everyone to circle pit around him – all before the Fridge himself crowdsurfs over the barrier. The set is a whirlwind of joyous movement, and, by the time closer La Di Da hits, it’s a shame to see the Glaswegians go – until next Trees!

Over on the Axiom, Canadian punk rockers PUP’s headline slot is handled in typical PUP fashion – cool, calm and collected… Just kidding. This is PUP after all! From the off, the band’s unique, quirky brand of tongue-in-cheek is perfectly unhinged (and we mean that as a compliment). Fans are fuelled by the pessimistic punk bangers thrown their way; Totally Fine has the crowd in an uproar, every voice screaming “LATELY I’VE STARTED TO FEEL LIKE I’M SLOWLY DYING!” with their entire chest. Newer tracks like Matilda are met with just as much acclaim as PUP classics If This Tour Doesn’t Kill You, I Will and the juggernaut that is DVP, every moment a total party. Their cocktail of lyrical self-deprecation and juicy breakdowns leaves fans euphoric – an undeniable highlight of the weekend.

The Forest stage pulls through yet again for the late night treats, giving us a bit of a taste of rock’s more off-kilter stylings. GIRLI, at her core, is the epitome of a popstar with unbelievably bright singalongs, sparkly synth favourites, and of course her hot pink trademark look. The Forest is full of people who want to inject their Friday night with a dose of technicolour sunshine, and GIRLI delivers the goods – and though she’s off 2000Trees’s beaten track genre-wise, the amount of fans she has out here tonight speaks for itself.

We wrap up our night of acts with Tokky Horror, who put on a show that while riotous is surprisingly distinct from the eerie, intense stylings they deliver on record – but equally captivating in a different, more full-band way. Now it’s time to answer the siren song of the silent disco, and continuing in the trend of the lineup, there’s something for everyone. Yes, everyone loves belting out some RATM or Welcome To The Black Parade, but after a day of alt goodness, sometimes you wanna be a bit silly. And Panic Shack absolutely deliver to the letter with their guest DJ set: WAP, Short Dick Man, and much more down that route gets knocked out to great, sometimes bewildered delight, providing the much-needed dance break we need to set ourselves up for Trees’s final day.

On to Trees’s final day here, or if you’re convinced already, grab tickets for 2023 here.