It’s not often that the unstable juddering of a car over a dirt road can feel so comforting. As you pull into a parking spot, you silently thank every conceivable deity for stopping your delicate car from stalling in front of everyone. But it’s okay – it’s 2000trees and the risk is worth it. As you leave your vehicle, everyone else’s excitement is infectious. People drag their tents off along the grass, eager to claim ‘their spot’, nostalgia flooding their faces when they finally step foot inside the festival grounds. There are a few new additions (such as a cool play-area for kids, a quirky miniature golf course, and a FERRIS WHEEL) but there’s no doubting where you are. You’re finally at 2000trees, and that guarantees three things: a weekend of awesome food, amazing music and an overwhelming sense of community.

After an evening of performances and silent discoing on Wednesday, everyone wakes up fully warmed-up and ready for action – and, given the amount of fabulous bands on the line up, everyone is prepared for a very busy weekend. Kicking it off is Soeur, who have filled The Cave up impressively despite an early set. They seem humbled and very happy at their crowd, and the crowd are certainly happy too as they begin their weekend with a helping of top-quality indie-grunge bangers.

Up next, it’s WSTR at the main stage. They’re here to prove anyone who still thinks they’re just a knock-off Neck Deep wrong – add in a slight Waterparks vibe, LOADS of fun, and the effortless stage presence of every band member, and what you’re left with is a genuinely great pop-punk band. Frontman Sammy Clifford thanks the crowd for their energy ‘so early’, but it’s no less than you’d expect for a band who are giving so much energy themselves! 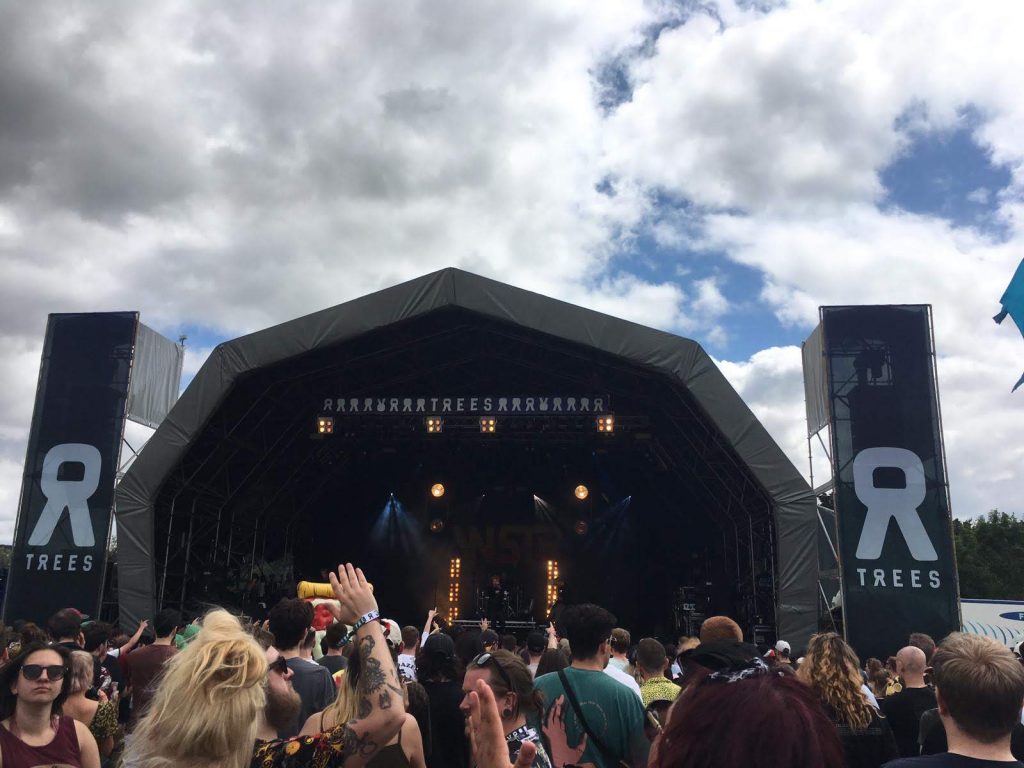 WSTR on the Main Stage

But the main stage is by no means confined to classic pop-punk and rock bands – 2000trees doesn’t play it safe. And we’re so thankful for it, because otherwise we wouldn’t experience the whirlwind of joy that Imperial Leisure have to offer up. These ska rockers are impossible not to love, their front man donning some of the wackiest outfits of the weekend, eventually ending up in a speedo and Hawaiian shirt combination that the crowd adore. The set is a flurry of laughter and upbeat bops, a true highlight of many people’s day.

Over at The Cave, it’s time for Nervus and it’s near impossible to believe they’ve not been playing the festival every year since its conception – that’s how at home they seem to be! Even after a gruelling overnight travel, Em Foster commands the crowd with an onslaught of punk tunes equal parts angry, optimistic, and passionate. The audience’s hype doesn’t dip for a second, especially when Em lets slip that a new album is on its way, and when she invites the whole crowd to join her onstage for a triumphant end to the set.

Speaking of Em, it’s brilliant to see just how many women are on the line-up: 2000trees never fail to shed light on brilliant, powerful female artists. There’s also a true variety in the types of bands these women are fronting: we’ve got the grunge-y False Advertising, with the charismatic Jen Hingley putting every ounce of energy into playing her guitar, serenading the audience and encouraging everyone to move; Orchards with their joyfully unique and upbeat math-pop; or even Novacub with their catchy, bright indie tunes, a true hidden gem that played to a small but incredibly eager crowd at the NEU Stage. 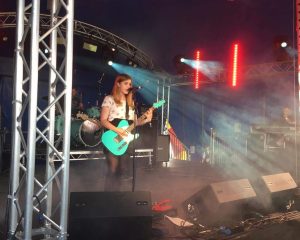 False Advertising at the Axiom Stage

Women in bands continue the trend of blowing us away as Nervus’ Em is back, this time playing for Milk Teeth with the ever-cool Becky Blomfield fronting up the outfit. And their set is just as cool as they are, a punk-rock racket spitting out tunes old and new, listeners spilling out of The Cave as they bop and mosh along.

Speaking of moshing, over at the main stage Yonaka are killing it. Theresa Jarvis dominates the stage, the human embodiment of girl-power as the band knock out banger after banger. In between songs Jarvis shows her love for 2000trees, talking of how it was their ‘first festival’. It’s a true statement of how brilliantly 2000trees supports new artists – and the community is just as eager to accept these artists and help them grow.

From here on out, the rest of the day is a never-ending cycle of moshpits. Hardcore punk is back to back, as American outfit Turnstile storm the Main Stage with tracks you literally cannot resist crowdsurfing to, before English, more blood-curdlingly raw Blood Youth take the NEU Stage. 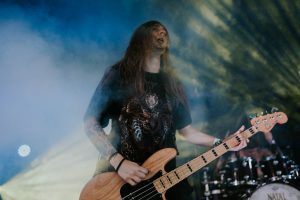 Blood Youth at the NEU Stage, shot by Hayley Fearnley

Yet, it all feels like training for Cave headliners While She Sleeps. From start to finish, these metalcore giants truly prove themselves. Despite vocalist Lawrence Taylor’s absence (resulting in a pretty impressive selection of guest vocalists), the show is still an onslaught of sweat and movement. It’s actually a true testament of how talented and powerful the instrumental backbone of the band is – and, gosh, Adam Savage’s drumming is first-class.

It’s a brilliant way to wrap up a fantastic day of music – everyone feels like they’ve given their all. And yet… even though you’re feeling drained… who can resist that fabulous 2000trees silent disco?

Check out reviews for Friday and Saturday!
Get yourself tickets for 2000trees 2020 here!